The Payroll Protection Program (PPP), which is part of the Coronavirus Aid, Relief, and Economic Security (CARES) Act, is a Small Business Administration (SBA) loan program intended “to provide a direct incentive for small businesses to keep their workers on the payroll” during the COVID-19 health crisis.

Since its founding in 1953, the SBA, which is a federal program, has “delivered millions of loans, loan guarantees, contracts, counseling sessions and other forms of assistance to small businesses.” All SBA loans are approved and managed by local commercial banks. According to Modern Money Network Research Director Nathan Tankus, “the forgivable loans running through the Small Business Administration are underwhelming and have [historical problems], in terms of being administered by banks and being slowed down and filtered through all the biases that banks have.”

Some SBA-approved lenders also have difficulties following the law, such as Wells Fargo, which in January settled with the United States Justice Department for fourteen years of fraudulent activity against its customers, employees, and investors.

Although the PPP is a loan program, the loans are forgiven “if all employees are kept on the payroll for eight weeks and the money is used for payroll, rent, mortgage interest, or utilities.” It is required that least seventy-five percent of the loan funds be used for these purposes.

The SBA processed more loan applications on the PPP’s first day than it did in the entire year beforehand. Unfortunately, large corporations have raided the PPP, with the vast majority of small businesses left in the lurch. A chaotic application process worsened the situation, ultimately resulting in only six percent of businesses receiving loans before the funds were depleted.

As reported by Reuters on May 5th, at least forty-one companies received PPP loans despite “already [having] enough to cover basic expenses for two months or more when they applied for the funds.” Some of these companies even showed optimism in recent press releases and regulatory filings. For example:

Along with dozens of others, these companies certified on their PPP applications that “current economic uncertainty makes this loan necessary to support” their ongoing operations.

On April 21st, the Financial Times identified a total of “83 [publicly traded] companies that had collectively borrowed more than $330m from the PPP, on average $4m each.” On April 27th, the New York Times reported on Domio, a New-York based startup that “most likely had enough cash to last until 2021,” yet laid off staff, applying for and receiving a loan three days before the PPP’s funds ran out.

These companies took out loans despite already being flush with cash and despite also having access to capital markets, which means they have alternative methods for raising funds, such as by selling stock.

Some large companies like Shake Shack, which is worth $1.7 billion and received a $10 million loan, returned the funds in response to public backlash. In an open letter posted to their Linkedin page, Shake Shack executives argued that “the PPP came with no user manual and was extremely confusing.”

Unemployment claims during the crisis are unprecedented by orders of magnitude. Graph source: Federal Reserve Economic Data, or FRED, downloaded 5/7/2020.

Large corporations would not have been able to take advantage of the PPP if the program had not been, again according to Tankus, “egregiously designed from a budgetary point of view.” Despite small businesses needing at least $700 billion to fund their payrolls for three months, Congress allocated only half that amount. It took less than two weeks for the PPP to be emptied, now with the vast majority of its funds not in the hands of small businesses, but rather large corporations.

This happened in large part, Tankus says, due to the structure of the PPP, which has provided loopholes for large corporations, put roadblocks in front of small businesses, could exacerbate racial inequalities, and discriminates based on immigration status. To add insult to injury, twenty-four hours before the PPP’s launch, in response to pressure by banks, the Treasury Department (to which Congress provided discretion over loan terms) doubled the loan interest rate and greatly shortened the time small businesses have to pay it back.

[Tankus’ blog documents the intricate details of the United States’ inadequate response to the COVID-19 crisis, with a focus on the role of the Federal Reserve. His work has been quoted by politicians in the United States and abroad, and in academic papers.]

In order to stop the spread of the virus, many who are ready and willing to work must stay home. In the words of economist Pavlina Tcherneva, “a recession is sadly necessary.” Instead of remaining in stasis until after the crisis, the lack of payroll funding forces small businesses to shed workers or their hours, beg for donations with GoFundMes, or shutter. This hurts employees and their families, and the businesses those families shop at. This in turn affects the employees of those businesses, and so on. In other words, the unemployment itself spreads like an infectious disease.

In fact, an April 3rd poll from the U.S. Chamber of Commerce [a pro-business organization unaffiliated with the United States government] and MetLife shows a large percentage of small businesses are considering permanent closure within the next three to six months: The reality of federal finance

Worst of all, the suffering is completely unnecessary. It’s an arbitrary political choice. As is the case with all federally administered programs and benefits, it is impossible for the United States Congress to “run out of money” with which to fund the PPP. According to Texas Christian University economics professor John Harvey, “there is 0% chance that the US will be forced to default on the debt.” According to former Federal Reserve Chairman Alan Greenspan: “there is zero probability of default.” And finally, economist Stephanie Kelton, who served as the Democrats’ chief Senate Budget Committee economist in 2015, and as senior economic adviser to Bernie Sanders’ 2016 and 2020 presidential campaigns: 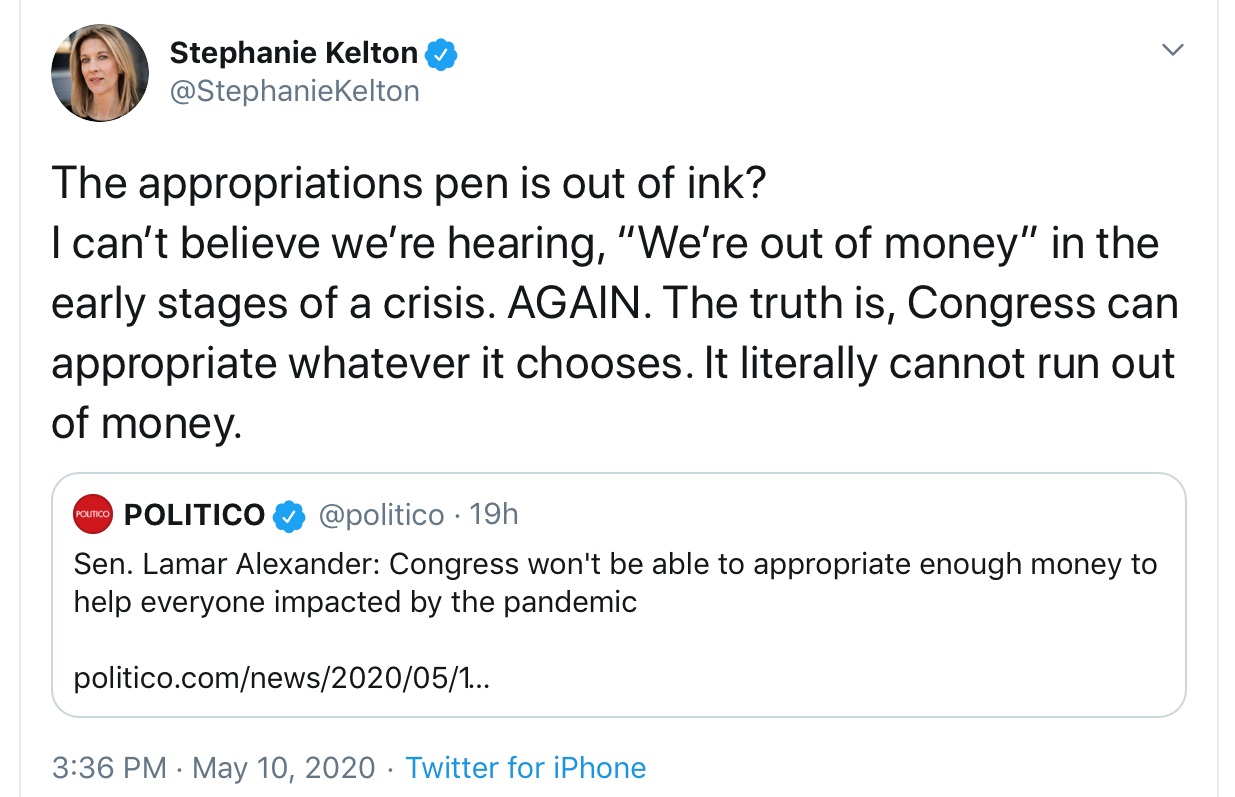 Congress is the only entity on Earth constitutionally empowered to create US dollars, which it does out of thin air, and not so differently from how you or I enter the number 100 into a spreadsheet: by pressing one, then zero, then zero. [To be more specific, Congress authorizes its creation, which is executed by its delegated agent, the Federal Reserve. To be even more specific, see here.] In addition, because the United States has full financial sovereignty, there is no purely financial constraint preventing Congress from funding the PPP for the duration of the quarantine and beyond, regardless its length.

Congress indeed has limitations, but they’re real, not financial. Sam Levey, Research Scholar at the Global Institute for Sustainable Prosperity, distinguishes between “real” and “paper” problems. Renowned economist Abba Lerner argued for federal finance to be geared towards achieving “functional”, not “sound” goals.

Further cementing this reality, on May 8th, 2020, the Supreme Court ruled that many forms of political corruption simply do not violate federal law, “embracing a view of the world that is unbearably bleak.” Attorney, author, and Fordham University associate law professor Zephyr Teachout describes the “shell game” being played by the Supreme Court:

Here’s what should madden you: In his decision in Citizens United, Justice Kennedy said that we should not worry corporate spending would lead to greater corruption, because bribery laws would still deal with our corruption problems. Then the Court went ahead and weakened bribery laws.

Yes, the Payroll Protection Program has serious problems. The cause, however, is not just those who abuse the system, but those who designed it to be abused, chose to needlessly throttle it on top of that, and then voted it into existence. Once it became law, these legislators looked the other way while the abuse happened. Now when it’s too late, they turn around and act surprised.

As the monopoly issuer of the US dollar, only the federal government, led by Congress, can backstop the economic devastation we currently face in a way that leaves all parties whole. Congress has decided instead to artificially cap the PPP at levels that are woefully inadequate. Congress uses its full authority at the push of a button when it comes to large corporations, corporate lobbyists, the military industrial complex, and the fossil fuel industry. Unfortunately, when it comes to supporting American small businesses and the millions of workers and consumers who depend on them, Congress has decided – even though it works just fine – to leave that button unpressed.

The Intercept reported on May 5th that House Speaker Nancy Pelosi supports an effort to divert small business bailout money to corporate lobbying firms. Here is the full bill, which expands coverage such that almost all 501(c)(6) groups would be eligible for PPP loans. (The Intercept article states “Many of the largest lobbying forces are organized under the 501(c)(6) section of the tax code as trade groups.”)

Let’s give the final word to Nathan Tankus, written on March 21st, when unemployment claims were only around a third of what they are today (from here, emphasis added):

[Many] don’t seem to realize how unprecedented a crisis this is. This is no mere recession. This is not even the Great Depression. This is the largest, fastest economic crisis that has ever happened. We’re hanging on a precipice and we need 3.5 trillion dollars distributed to households at a minimum – let alone the support system we need for businesses. … This is the biggest crisis we’ve ever faced and we need quick responses with trillions out the door now. Another view of the data from the New York Times. Photo source.

The larger issue is that Congress imposes false scarcity on federal programs under the guise of concern for “fiscal responsibility.” The same false scarcity threatens to permanently shutter the United States Postal Service (USPS). As reported last month by Naked Capitalism:

Under the terms of PAEA [Postal Accountability and Enhancement Act, passed by Congress in 2006], the USPS was forced to “prefund its future health care benefit payments to retirees for the next 75 years in an astonishing ten-year time span” – meaning that it had to put aside billions of dollars to pay for the health benefits of employees it hasn’t even hired yet, something that “no other government or private corporation is required to do.”

By writing and then passing the PAEA, Congress has forced USPS to do the impossible, which, unsurprisingly, it has been unable to do. It is now being claimed with faux consternation that USPS is “going broke” and may have to be shuttered – forever empowering private shipping services such as UPS, FedEx, and Amazon.

[According to Ph.D. political scientist Joseph Firestone, the onerous provision was rammed through by the then-Republican controlled Congress. The subsequent 2009-2010 Obama administration, which had control of both houses of Congress, could have repealed the provision but did not choose to.]

While the USPS, a federal agency, must pre-fund all its retirees for seventy-five years into the future, the executives at many large private corporations across the country get to further enrich themselves by brazenly plundering the pensions of their past, present, and future employees. Congress and the justice system have enabled this criminality for nearly a century, while providing essentially no justice for pensioners. [Here is an episode of the podcast Historic.ly that I recorded last year, where I discuss this topic in depth. The written description also contains a substantial overview.] 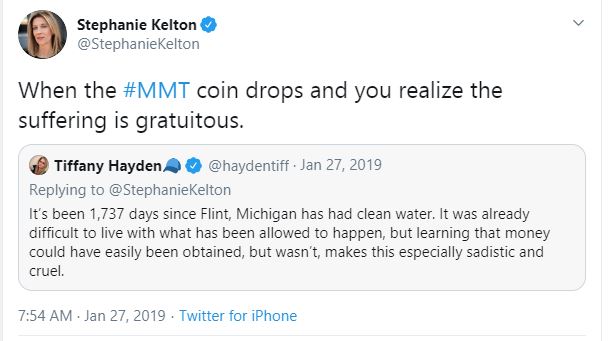