Philadelphia City Hall was hectic this Saturday as supporters of Venezuelan President Nicolás Maduro’s government exchanged chants with counter-protesters. As I arrived on the scene, groups of dueling demonstrators lobbed shouts back and forth in Spanish, along with plenty of gestures.

“You don’t know what it’s like to live in Venezuela!” replied some of the counter-protesters, who claimed to be Venezuelan.

Venezuela is currently in the middle of what Maduro supporters consider to be a coup attempt. The opposition characterizes the situation as a constitutional crisis initiated by Maduro.

Venezuela’s most recent election resulted in an easy victory for the incumbent President Maduro. However, international observers criticized the election process and denounced the results.

Reacting to this criticism, Venezuelan National Assembly majority leader Juan Guaidó declared himself President and swore himself into office on Wednesday, claiming a constitutional duty to do so.

The same day, President Donald Trump stated his support for Guaidó, which was widely perceived to legitimize Guaidó’s claim to the presidency. Across both major US political parties, voices have now called for the fall of the Maduro administration and even military intervention.

However, by and large, the far left stands with the Bolivarian government and its socialist doctrine of chavismo. This support relates not only to socialism, but also to a principled anti-interventionist and anti-imperialist stance held by many leftists. 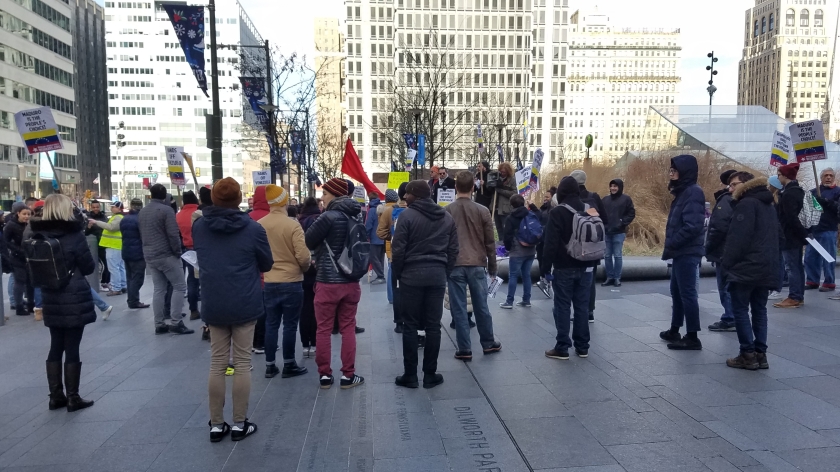 The pro-Maduro demonstrators faced only a handful of counter-protesters, including a representative from a non-profit that fosters Venezuelan culture in the United States.

That representative, José, whose last name is omitted for privacy, stated that the ascension of Guaidó is merely a provision of the Venezuelan Constitution. A pro-Maduro organizer disputed this, saying, “If there is, I would like them to point out where it is in the Constitution.” José cited Article 233, which discusses the succession of power in Venezuela.

The article states that the President can be removed from office in case of (emphasis is mine) “death; resignation; removal from office by decision of the Supreme Tribunal of Justice; permanent physical or mental disability certified by a medical board designated by the Supreme Tribunal of Justice with the approval of the National Assembly; abandonment of his position, duly declared by the National Assembly; and recall by popular vote.”

Guaidò claims that the National Assembly has duly declared Maduro to have “abandoned” his position. It’s unclear if that argument holds water, since Guaidó declared himself to be President (in Spanish, here) and only subsequently gained the approval of the National Assembly. The protest organizer argued that it was Guaidó who violated the Constitution.

José went on to say that he “[does] not support the Trump administration, military intervention, or a far-right government” in Venezuela, but he cautioned that many pro-Maduro activists were “uninformed.” We said a quick goodbye as the crossfire between the two sides drowned out his words, and I thanked him for his time.

A Cacophony of Voices

“Baby killers! Communists! Why don’t you move to Venezuela?” yelled a man from the anti-Maduro side.

“¡Cállate!” responded a supporter, and the crowd drowned out the five- to seven-person counter-protest with pro-communist chants. The shouting man apparently did not know that many of the activists actually were communists.

When one of the Guaidó supporters shouted, “We are from Venezuela,” a Maduro supporter switched back to English to quip, “You’re from Philadelphia now!”

“¡Gusanos, va a la casa!” shouted another young leftist, which means, “Worms, go home!” “Gusano” is a particularly strong slur (link is in Spanish) used against those who are perceived to have abandoned Venezuela by fleeing with their wealth.

Comments like these underscore a unique tension in Venezuela between those who remained in Venezuela after the Bolivarian Revolution and those who left it behind in order to disassociate from socialism.

One pro-Maduro organizer stated that while there were Venezuelans on both sides of the debate, a wealth disparity existed between those two groups. The organizer’s reasoning was that the Venezuelans who fled chavismo could afford to move and that they oftentimes moved only to protect their wealth. Because “people who don’t have money are stuck where they are,” he argued, Venezuelans in Venezuela have different priorities than Venezuelans in the diaspora.

Echoing these sentiments, a Mexican woman named Carmen (whose last name is omitted for privacy) spoke about her experience as a poor Latin American. Carmen stated that elections across Latin America are unfair and that American interference is actually part of the problem. The poor of Latin America are “crying out without a voice” in support of their elected governments, and foreign intervention silences them, she claimed.

Counter-protesters were less unified as to what they wanted for Venezuela’s future, besides Maduro’s fall from power. A woman walking by shouted that Maduro is “just like Trump,” and I questioned who would take charge in the power vacuum formed by the overthrow of Maduro. As the election of Jair Bolsonaro in Brazil has shown, fascists in Latin America are on a totally different level than far-right populists in America.

Protest organizers were chiefly concerned that criticism of Maduro, who is unpopular, is being used to topple the Bolivarian Revolution, which is supported by the people of Venezuela. They argued, as I did, that if Maduro were removed, a far-right leader would likely seize control, as has happened many times before across South and Central America.

In light of that conflict of interests, activists say, the United States should stay out of Venezuelan politics entirely. 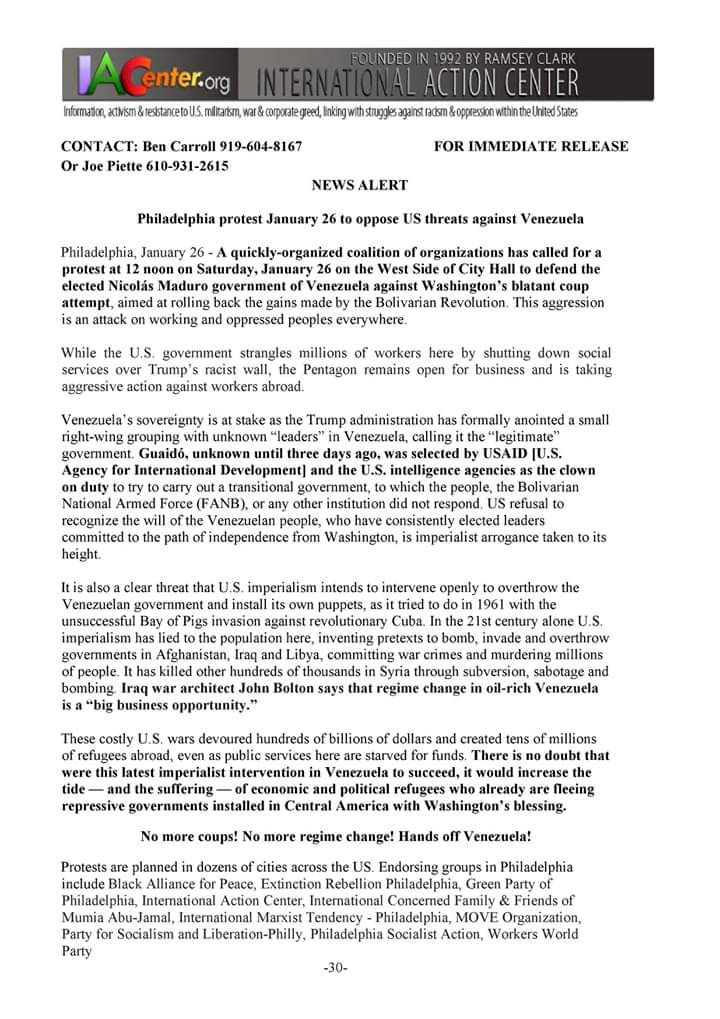