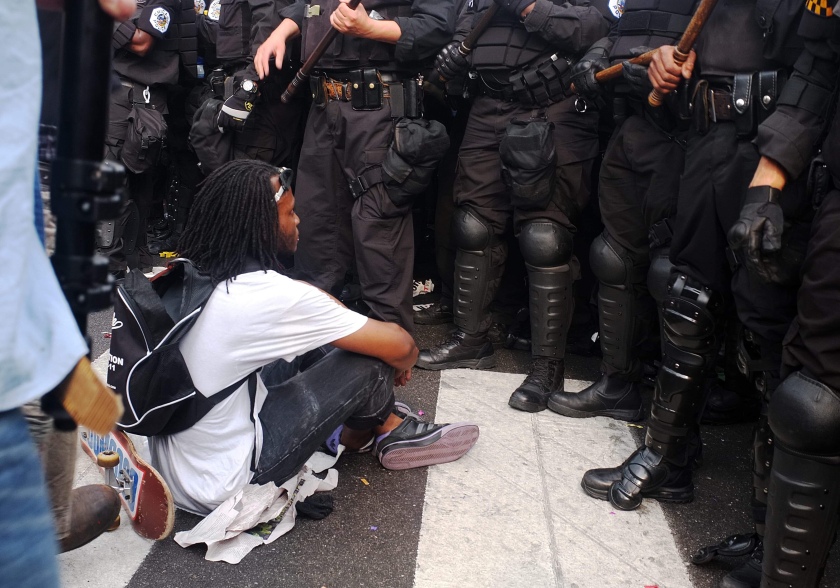 Above: from Wikimedia Commons

An editorial by Ben Szioli
Copy edited by Jeff Epstein

This Wednesday, June 27th, Bernie Sanders made the single most ridiculous remark that he has made in three years of stumping for his platform around the country.

Speaking with MSNBC in a live appearance, Bernie commented that “people have the right to go into a restaurant and have dinner,” referring to the expulsion of Sarah Huckabee Sanders, Trump’s faithful mouthpiece, from a Virginia restaurant on Saturday, June 23rd. It might seem hyperbolic to say that this is truly the most ridiculous comment of Bernie’s extended speaking tour, but when you get down to it, the statement is politically backwards and simply false.

Bernie’s comment came in response to a network host’s question about a “lack of civility,” a talking point that has picked up a lot of steam among handwringers and pearl-clutchers.

It takes direct action to make change in the face of opposition. In our case, the opposition is a heartless breed of corporatism that hopes to starve the poor and shut out dissent to reward the economically successful. Remaining civil toward such devious enemies in hopes that a reasoned debate might somehow convince them to act against their own self-interest is foolish, and it enables the powerful to continue their economic violence. When you tolerate violence, eventually, the violence that you tolerate toward others can be directed toward you. It is at times necessary to stop the cycle of violence by force.

Popper witnessed firsthand how a policy of appeasing injustice led to Europe’s fall to fascism. He understood that in the absence of specific action to fight intolerance, intolerance would continue to thrive. Justice must be actively defended, which sometimes involves a fight. While fighting is almost always uncivil, it is also often just. It is therefore obvious that civility is not the standard by which we judge justice.

As an example, it is not civil to keep children in cages, nor is it just. It may be civil for us to leave the children in cages and ask quietly for their freedom, but it is unquestionably unjust. If you value “civility” (or some concept of social norms and order) over justice, then you are far worse than merely uncivil: you are allowing violence to be committed through your own implicit approval of injustice.

Most likely, however, he’s simply hitting Democratic Party talking points meant to attract Republicans ahead of the midterms, in hopes of currying favor among party insiders to prepare for a 2020 presidential run.

What’s most disconcerting is that Bernie seems to be focusing on activists’ tone and ignoring the conditions that motivate the activists to protest. Refusing to listen to the powerless is one of the last things anyone would expect from him. After all, this is the same man who allowed Black Lives Matter members to step up to his podium when they stormed his stage. Advocating for the powerless is a cornerstone of Bernie’s platform, and it’s deflating to see him lose sight of that.

This is part of a pattern of pragmatic wheeling and dealing that Bernie has engaged in, to some degree, for his entire career. In the process, one has to wonder if his ideals have shifted. Bernie jumped from Marxist organizing in his youth to progressive local politics when it suited him. From there, he moved on, seizing a chance to enter Congress as an independent but effectively removing himself from a position to impact politics at all. With each transition, Bernie has succeeded at expanding his national profile.

While his 2016 campaign platform may seem like a swerve back left, a closer analysis shows the opposite. There was no free housing, no jail time for financial criminals, no free food for children. Policy planks that would have been obvious to a young Bernie were somehow left out of the 2016 platform. Bernie was willing to step away from socialism yet again to give himself a chance at the next level. I fear that once more, he has distanced himself from his principles — this time, in order to gain acceptance into the Democratic Party.

All of this could arguably increase Bernie’s audience, allowing him to accomplish goals that would progressively shift to the left. However, by running with this most recent set of Democratic talking points, Bernie has finally made a move that casts doubt on the possibility of a swing back left. It is a huge error to frame disrespect toward Huckabee Sanders as being a violation of her rights. It helps Republicans hold their footing, and at the same time, it prevents the left wing from organizing effectively.

It’s particularly disappointing that Bernie seems to have internalized this point. He sounds like he believes it. Look at the intentionality with which he worded his statement: he said she has “the right to go into a restaurant and have dinner.”

You have to admit, that’s odd wording. I’m familiar with the right to a free press, or at least I’ve heard they have it in other countries, but I’ve never heard of the “right to go into a restaurant.” I’m not finding it in my pocket Constitution. This leaves me wondering why exactly Bernie used a word with a meaning as nuanced as the word “right.”

Egoist anarchist Max Stirner (subject of an absurdly cool caricature by Friedrich Engels) rigorously critiqued the concept of rights, arguing that they are immaterial and manmade. This type of manmade fantasy, in the language of Stirner, is a spook: a ghost. Like a ghost, spooks are not real, but these concepts possess the minds of the living and control their actions. Spooks include the state, society, property, and a whole lot more. Civility is a spook: it has no concrete form, but yet it controls the actions of people as powerful as Senator Sanders. Rights are a spook.

Stirner’s view was that spooks disappear when faced with force and that force, not rights, is what secures safety for people. “The tiger that assails me acts within his rights, and I who strike him down also act within my rights,” Stirner wrote, “It is against him that I defend, not my rights, but myself.”

We believe these spooks, these useful fictions, and allow them to possess us, but they do not have any power in the real world; only people do. In day-to-day life, our freedoms are enforced by a combination of respect from others and self-defense, not by civility or written law. Your rights exist only to the degree that you demand them, or someone else offers them freely.

However, we do not need to allow any given idea to control us, especially if it does not benefit us. As private citizens, we do not owe Sarah Huckabee Sanders a moment of peace, and we do not need to respect whatever rights Bernie claims she possesses. She has no right to our respect if respect would harm us. She certainly has no right to insist upon civility if it infringes on our Constitutionally-enshrined right to peacefully protest. The freedom to “go into a restaurant and have dinner” whenever you want, on the other hand, is a freedom that Bernie materialized out of thin air for the benefit of Huckabee Sanders.

Read that sentence again. Bernie, rather than being the tiger that assails the Trump administration, is backing off and respecting rights that do not exist, on behalf of people who don’t respect anyone else’s rights.

If the question is who has more power to infringe people’s rights, then there is a chasm between Huckabee Sanders and any other restaurant-goer. Huckabee Sanders can commit atrocities with the mere words she speaks for President Trump. Those same atrocities would be impossible for one person to commit otherwise. Bernie is asking us to be civil and disarm ourselves in a battle where we are already outgunned. Bernie has been fighting this war his entire life, but he does not lead it. If he cannot do what needs to be done, someone else will.

When you have no choice but to fight to survive, civility means choosing to lose. Civility means disarming yourself against the tiger in hopes that he will respect your rights, which were handed down on paper by dead men who are no longer around to defend you. It is the tigers of the world who benefit from this arrangement, not you or I.

It is easy for a man, Bernie, to demand civility when he has already escaped the grip of oppression. It is much harder to affect change when your hands are tied by the status quo and your life is in danger. If a tactic is effective, it must be considered, and direct action is effective.

When you shut down the ability of the powerful to live their lives in isolation — when you force them to face the reality of their actions — you wear them down and interfere with the violence they are trying to brandish against you. A person who questions their conscience and can’t stop looking over their shoulder is a person who will struggle to wield power over others. A civil attitude can never inspire real doubt in the minds of the powerful.

Make it personal. Shout down injustice. Storm a Mexican restaurant to scare off a fascist. They tell us to be civil because they fear what would happen if we dared to fight them.

Do not be civil.