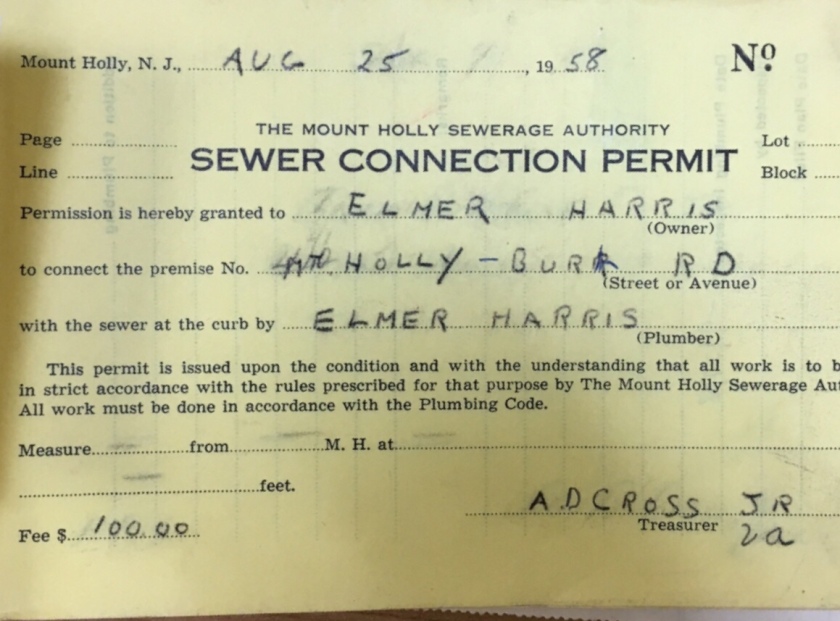 Written by Jeff Epstein, Editor-in-Chief of Citizens’ Media TV
With thanks to Andrew Huber
Copy edited by Ben Szioli

MT. HOLLY, NJ — The Mount Holly Municipal Utilities Authority (MHMUA or MUA) overcharged many of its seventeen thousand residential homes, which contain about fifty thousand residents, for decades. There were two kinds of overcharges: one for incorrect meter sizes, and another for postage and handling.

With the assistance of Lumberton resident Andrew Huber, Citizens’ Media TV’s coverage contributed to the MHMUA acknowledging for the first time that the meter size errors were pervasive and spanned decades. Incorrect meter sizes were provided to the MUA by the “originating builder” when the property was initially hooked up to the sewer system. The vast majority of the incorrect sizes were larger-then-actual, hence the overcharges.

The second overcharge was a postage and handling fee for mailing the bill itself. (According to Huber, customers are charged this fee despite having to supply their own postage, and whether or not they pay online.) This fee steadily increased starting in 2010, in violation of the contracts drafted between the MHMUA and each of the towns it serves. This postage and handling fee only affects residents outside of Mt. Holly which, as of 2010, has just under 4,000 homes. This leaves 13,000 residential customers affected.

The MHMUA’s computer system was changed in May 2017, at which point the bills sent to consumers also changed format. The new format revealed fees the MHMUA had long been collecting, but were previously lumped into a meaningless “flat fee.” Now the fees are explicitly itemized.

From Brandy Boyington, the MHMUA’s records custodian and Assistant to the Executive Director:

The MUA changed to this new software in May of 2017. The change was due to a few factors. First, our previous software was due to cost a significant amount of money for licensing and server related costs. MCSJ would offer a substantially lower cost to operate with no SQL licensing requirements. Secondly, MCSJ is utilized by the vast majority of municipalities and other governmental entities in NJ. All of the townships serviced by the MUA utilize this software.

The potential to communicate information to them from this software would be more compatible than our previous software. In addition, this new software brought along a new billing format. It allowed the MUA to be more transparent to its rate payers by displaying charges in accordance with the rate schedule. The new software also provided the rate payers the ability to pay their bills online.

The MHMUA has committed to fixing the meter-size mistakes once and for all, but have decided to not provide any retroactive reimbursements to its customers. The MUA claims that this is because the mistakes were not their own, but rather those of the originating builders. Unfortunately, these mistakes were hidden in the “flat fee” portion of the bill for decades. Also unfortunately, the MUA has decided that their customers should bear the entire brunt of this mistake.

In January, the MUA also agreed to reimburse all customers for the postage and handling fees, up to a maximum of $26.50. If all thirteen thousand customers were reimbursed, it would add up to more than $300,000. However, the onus for receiving this reimbursement has been placed onto the individual consumers, each of whom must explicitly apply for and request it. (The full text of the MUA’s press release is at the bottom of this article, in an appendix.)

After the MHMUA acknowledged the meter size overcharges but before corrections were made, concerns were raised regarding whether the history of these changes would be properly recorded and archived. Without that history, any potential future litigation or even analysis would be impossible, as it could not be known what happened or when it happened.

Citizens’ Media TV twice asked the MHMUA if and how this history was recorded. After receiving no confirmation, we submitted a public records (OPRA) request to manually accumulate the information. Here is the full text of request, which was originally discussed at the bottom of this article:

For all MHMUA customers, and for data as existed in your database/software system on August 31st, 2017 (or any point before water meter corrections were made), can you please provide a text file where each line contains the following information for a single customer, in tab-delimited format:

In response to our request, Boyington requested a seven day extension. Soon after, she contacted us to state that the first four elements of the request would take a lot of work, but were possible. The fifth and final item, however, regarding the “originating builder,” was not possible without weeks of manual full-time work. She said that this is because the information and documents regarding originating builder, for all years before 2015, does not exist in the computer system at all.

An originating builder is the company that informs the MHMUA of the size of the water meter, at the time the property is hooked up to the sewer system. As described in this article:

The size of the water meter, specifically the diameter of the inlet, is the basis for the Quarterly Service Charge. The charge is essentially a periodic fee for being connected to the MUA system — it is not a reflection of the pipe sizes in the home. Also, note that this is a water meter. The amount of sewage output is not measured at any point. Rather, the MUA’s measurements are based exclusively on the amount of water input, as measured by the water meter.

Not until 2015 were any records regarding originating builders stored in the MHMUA’s computer system. Below are photos of examples of paper records to this effect. According to Boyington, there are dozens of drawers and boxes filled with papers such as this. She also said that it is not uncommon for properties to have multiple or ambiguous originating builders.

The MHMUA has changed their database three times over the past two decades and none of the databases tracked/track developers [originating builders]. It’s also possible that there were multiple developers in one development. The MUA recommends acquiring this information from each township’s construction office who would likely track the developer along with each development.

One Example: in 1993 Hainesport Township passed an ordinance and subsequently installed a sewer system to provide sewer service to its residents. By 2003, Hainesport’s sewer installation project was complete and approximately 1000 sewer applications were submitted to the MUA by either the home owner or the plumber. None of these applications contained developer’s information because they were submitted individually.

Applications can be filled out by many different people: plumber, home owner, developer, administrative staff of the builder etc. In order to find a specific application, the record custodian must know the lot, block, street address, township and development. Archives box(s) must be manually pulled and sorted through to see if an original application is available. Not every address constructed by the developer has their own application and some of the older applications contained multiple addresses on one application. In this instance, it is likely that necessary information may have been left off.

Evidence that the MHMUA does permanently record history

I, the author, am a former computer programmer. Long ago, I designed and built the kinds of databases used as the “back end” for software packages such as the one used by the MHMUA. After learning this, Boyington offered to give me an in-person tour of the computer system and to demonstrate how history is indeed permanently archived into the system. Specifically, she stated that no one in the MHMUA offices has the ability to alter its history in any way.

Below is a summary and demonstration of what I observed. Thanks to Boyington and MHMUA treasurer Michael DeHoff for the tour and for supplying this information.

First and foremost, once a customer record has any activity on it at all, it is no longer possible for anyone on the MHMUA staff to delete it without the software vendor’s intervention. There is also no way to access the database itself.

The following is a step-by-step demonstration of how information is changed and how its history is subsequently observed.

Change two: The Actual and Bill-to name has been changed from Jeff Epstein to Mount Holly MUA

The change history screen, demonstrating all of the above changes are recorded

In light of this demonstration, and because of the substantial extra fees that would be required to obtain a full response, Citizens’ Media TV has withdrawn its OPRA request.

Mount Holly- The Mount Holly Municipal Utilities Authority (Authority) has announced a sewer credit which is being made available for rate payers who may have overpayed certain postage and handling fees. Resolution 2017-110 was approved at the monthly Authority Board Meeting on December 21, 2017 memorializing this credit.

Customers of the Authority, who lived in towns serviced by the Authority outside of Mount Holly Township for the period from January 2007 to December 2017 were charged at a rate higher than agreed for postage and handling fees. These customers were billed in excess of up to $0.75 per billing cycle and are eligible for maximum refund of approximately $26.50 per account.

The extra charge on the quarterly bills affected the towns serviced by the Authority are: Eastampton, Hainesport, Lumberton, a portion of Moorestown and a portion of Westampton. The Authority will be notifying all eligible customers on how to obtain their account credit in the next billing cycle. When available, customers can also go to the Authority Website and download the certification form to verify eligibility at http://www.mhmua.com/news.php
All credit requests must be received by the Authority on or before June 1, 2018.

Customers in the Townships outside of Mount Holly will temporarily continue to receive a charge of $2.25 per billing cycle, but will receive a simultaneous $0.75 credit until the fee schedule is legally changed at the Authority’s June 2018 rate hearing. Effective the first billing cycle in January 2018, the total charge for postage and handling will be $1.50 per billing cycle for all customers serviced by the Authority.

A steward of the environment, the Authority is responsible for the sewer service for 15,000 rate- payers in six (6) municipalities. The Authority was created in 1946 by Mount Holly Township Ordinance and has grown with the communities it serves. In 2010, a $35 million-dollar state of the art treatment facility was put into service to meet the increasing regulatory demands and population growth for the upcoming decades.