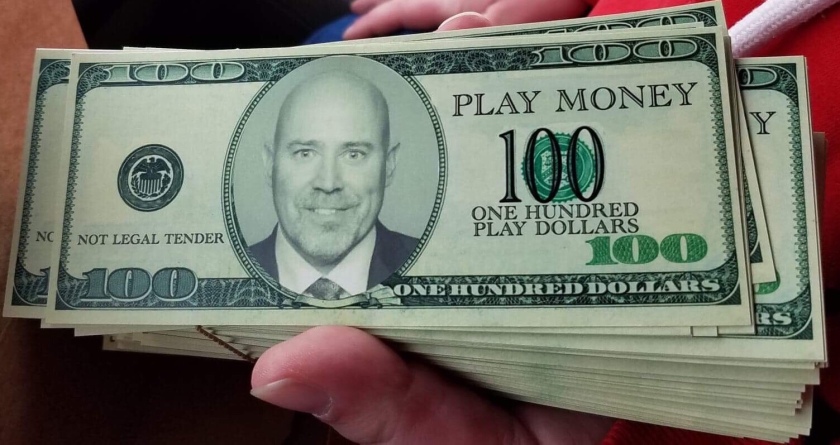 All photos in this article are from the April 15th protest, taken by Laurel Powell Smith. The Tom MacArthur funny money was created by New Jersey for a Better Future

A letter to the editor by Lisa Cenneno of Mount Holly, NJ

Last Sunday, April 15, I had the privilege of joining about 30 people for a Tax Day Protest held in front of Congressman Tom MacArthur’s Marlton Office. We were all there to protest Tom MacArthur’s support of the Trump Tax Scam which minimally reduces a citizen’s federal tax bill, but greatly affects the future of New Jersey constituents.

No one who spoke at the rally believed they would experience any significant tax savings. However, it is estimated that those in the 1% would receive tax benefits of about $53,000. Each person addressed their fears surrounding the cap on NJ state and local tax deductions. This feature of the tax bill is predicted to reduce real estate property values by 7.5% in this state!

The biggest area of concern revolves around the 1.5 trillion dollar deficit being created by this bill! The bill provides enormous benefit to corporations and high income individuals. This savings ultimately results in the starving of funds available for our public schools, public roads, public services, Medicare, Medicaid, and social security.

And the greatest anger expressed by all was the inane and infuriating hypocrisy demonstrated by Congressman MacArthur when he then voted to support a balanced budget. How can you create a 1.5 trillion dollar deficit and then say a budget cannot have deficits? Taking funds away from the public good is the only way to accomplish this!

Tom MacArthur was the only NJ Congressman to support this tax bill and this support coupled with his budget deficit vote are senseless and incongruent. He has simply become a mouthpiece for any Trump Republican policy and no longer represents or protects his constituents. It is certainly time for change in NJ CD 3!