[Perhaps at some point this will become a fully fledged, edited article, but for the moment it’s just a blog post.]

I give a great first impression. I’m obviously smart, ambitious, and kind – that’s the real me. But then, with some people (unfortunately, too many), my anxieties kick in. A permanent negative cycle begins and my first-impression (real) self disappears forever.

This negative cycle is simple:

I am uncomfortable and downright unfamiliar with not being hurt or abandoned, especially by those I care about and/or “look up to” – knowing full well that the very concept of “looking up to” others is not a good thing.

The hell was real decades ago: seven years of severe bullying during elementary, middle, and high school; plus a family that did their best but made it much worse; followed by the misguided decision to socially isolate myself for nearly a decade.

Ever since then, however, that hell has continued because I created it for myself out of whole cloth. I make my fears a reality with my behavior. I’ve kept it going because it’s all I’ve ever known. I do it because I did it. In a way, I’m addicted.

For the first time, I can see the negative cycle is a sinister and needless parlor trick. Now knowing the underlying logic, it is clear that the cycle can be broken at any time. All I need to do is choose for it to be broken. I can return to the original, real me whenever I’m ready. It’s always been possible.

The only remaining burden is the massive amount of emotional wreckage I’ve left in my wake, for decades on end. Because of it, lesser people have indeed hurt me. Greater people have understandably abandoned me. A select few of the greatest people continue to accept me in spite of it all.

I can never make up for the damage I’ve caused. (If you’re someone it’s affected, I’m so sorry.) The emotional debt I carry is now approaching infinite. I simply cannot bear the burden any longer. It’s long been impossible to undo all the damage I’ve caused. For the rest of my life, all I can do is endeavor to heal some of the individual wounds, one at a time, as best I can, and commit to paying positive vibes going forward.

I have a lot of healing ahead of me, but for the first time, I think I can finally see the root of problem.

I am canceling my debt. (Cancel. There’s no sin to forgive.)

On May 1st, I had a breakthrough regarding MMT and wrote about it in a Facebook post. A full screenshot can be found at the bottom of this post. It has been brewing in me for a month, and a couple days ago the above came to me. In an effort to improve on the Facebook post, I wrote the following last night. It needs work, but it’s a good start:

Before you or I can spend five dollars, we must first get that five dollars from somewhere else: earn, borrow, steal, find, or beg for it. To put it another way, every dollar we spend must be offset by a dollar of income. We have no choice in the matter, because we are users of the United States dollar. We are currency users.

The central government of the United States is different (as is the UK, Japan, Australia, Canada, and others). They are the only entity on Earth that can legally create the United States dollar (pound, yen, $AUS, $CAN). It is the issuer of the currency. In fact, the only possible way for the issuer to spend is by creating new dollars (by “issuing currency”). From the 1998/2000 paper. Can Taxes and Bond Sales Finance Government Spending?, by Stephanie Kelton (then Bell). (As the paper makes clear, “technically incapable” means impossible.)

It is sometimes possible for the issuer to safely spend (create) five dollars without ever having to offset it. In order to prevent inflation, depending on what they want to spend that money on, it may indeed be necessary to offset all of those five dollars. But sometimes it may only be necessary to offset three. And sometimes zero. Offsetting at the federal level may be done through the collection of federal taxes or the sale of bonds. Depending on the context and conditions, the offsetting may need to occur before the new spending, and sometimes after.

(Remember the above the next time you hear someone ask, when it comes to a federal program or benefit, “How’re you gonna pay for it?”.)

Despite its awesome powers, the United States government arbitrarily and needlessly chooses (chooses!) to offset every new dollar of spending as if it were a currency user. It does this by selling bonds. For example, when it spends five dollars, it must first sell five dollars in bonds to private citizens (in the economy, also called the “non-government sector”). The revenue for those bond sales is collected, only after which the new five dollars is spent.

So five dollars is first removed from the economy, and only then can five new dollars be spent back out into the economy (from the central government to the non-government). However, as is the case with all revenue at the federal level, the income from those bond sales is destroyed.

Yes, the income is destroyed, then the new spending is created. As ridiculous (and financially and logically unnecessary) as it is, this is how it’s always done, and always been done.

However, importantly, in this scenario, the new five dollars is not the only thing that has just entered the economy. A newly issued five dollar bond also entered it. In however many years, that bond will be redeemed for five new dollars (that are never offset) plus any accumulated interest. Until that time, they can sell it to anyone at any price.

But remember, as stated in the very first sentence in this article, currency users must offset all their spending. They must first obtain every dollar they spend from somewhere else. Since the only entity on Earth that can create dollars is the issuer, the five dollars they used to purchase that bond, as a point of logic, must have come from the issuer at some point in the past.

In other words, the issuer has arbitrarily decided to offset all its newly-created spending with spending that it newly created at some point in the past. Therefore, there is no practical difference between an issuer issuing new money straight into the economy (without mandatory one-to-one offsets), and doing so with the mandatory offsets as described above.

There is, however, an enormous political difference, since that “debt” can be used to scaremonger people into believing that the issuer is somehow like a massively large corporation, when the truth is that the issuer is the literal god of our money. In a way, those who earn the free money these bonds provide, are addicted to it. They will fight to the death in order to prevent the system from changing.

Now that we understand the underlying logic, we know that this “cycle of debt” can be broken at any time. All we have to do is choose for it to be broken. It’s always been possible.

From the 2005 paper, The Natural Rate of Interest Is Zero, by Mathew Forstater and Warren Mosler. (A bond is a type of security.) 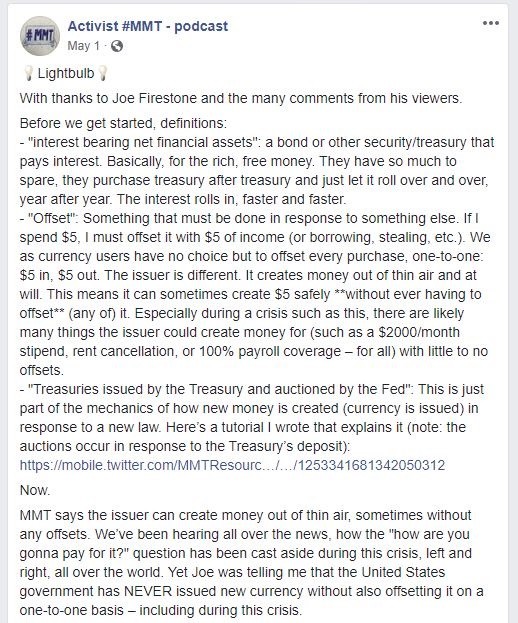 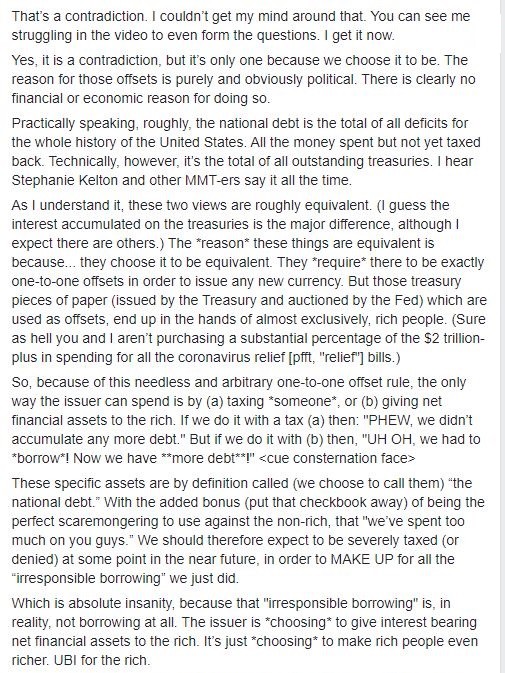 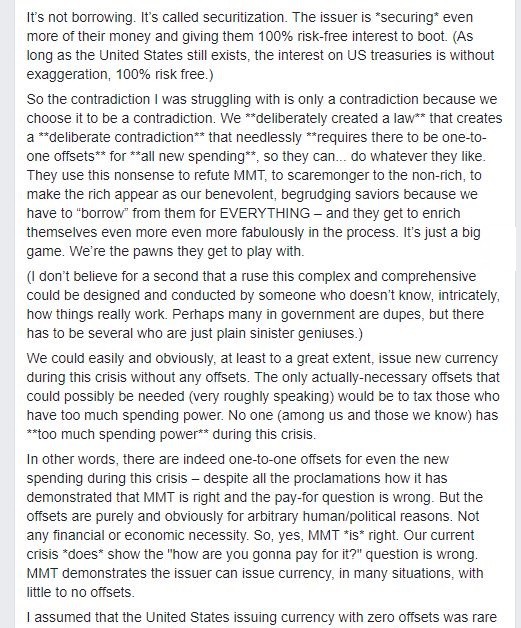 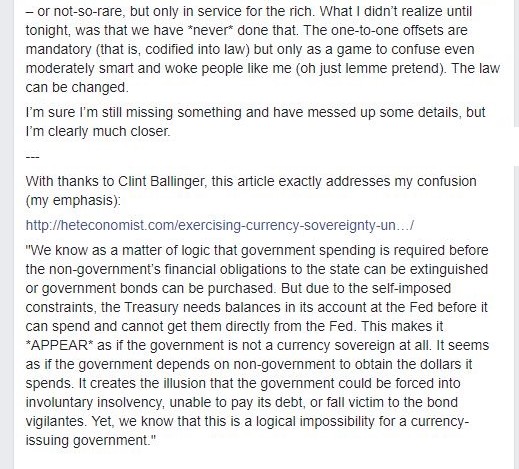