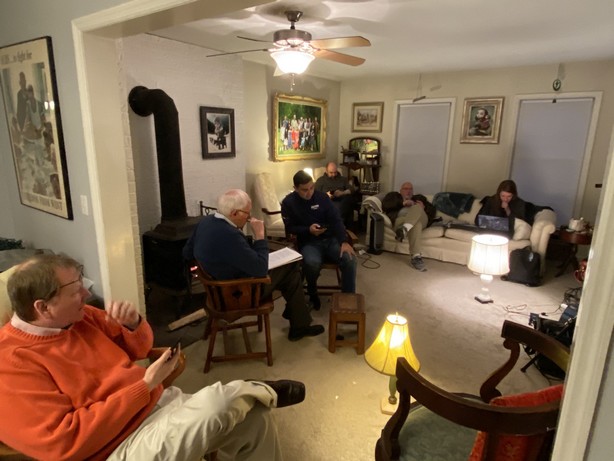 Days before Super Tuesday, Senator Bernie Sanders (VT) was predicted to clean up, possibly sealing an insurmountable lead against his opponents. Today, the Sanders 2020 campaign is on life support, sitting in second place (out of two), with some critics arguing that it’s already over.

What the hell happened?

Without a debate between then and the next contests, Sanders was hammered twice, losing Michigan, which was supposed to be one of his strongest comeback performances. That led to calls for Sanders to drop out, which he resisted. He intends to face Former Vice President Biden in the debate tonight. The debate, however, will take place in Washington D.C. without an audience, robbing Bernie of a huge opportunity to crush Biden in front of a minority-heavy Arizona crowd.

Despite the hopelessness of his situation, Sanders has led a series of fireside chats to talk the populace through the COVID-19 pandemic. Trying to give an idea of what his presidency would look like, Sanders has emerged looking downright Roosevelt-esque. Observers have begun to see him as the type of president needed in a crisis like the current moment. In his fireside chats, he effortlessly weaves the topic of the pandemic together with human rights like healthcare and workers’ benefits.

With this combination of the present moment and its chaotic conditions, with a campaign that criticizes every facet of the establishment, the contrast couldn’t be clearer. As the government suspends ordinary fiscal rules to subsidize the nation, it proves Sanders’s point that we can spend more than we admit. When people are unable to afford COVID testing, it proves the need for universal care. When we are unable to obtain enough surgical masks without price inflation, it proves the inefficiency of capitalism itself.

In the light of these glaring contrasts between a Sanders agenda tailored to our modern crisis, versus Biden promising a delusional return to life before the crisis began, is COVID-19 enough to turn this race, and world history, upside down?

Former Vice President Joe Biden (DE): Biden has consolidated the party and taken the lead in delegates. He crushed Super Tuesday, dominating the early results. Positive results for Sanders were left to trickle in over the subsequent days and weeks. The big victories for Biden were celebrated early, and the late victories for Sanders were ignored. The momentum kept up in Michigan, where Biden beat Sanders among what was supposed to be a very favorable electorate for the Senator. All Biden needs to do is finish out this primary season and he will emerge ahead of Sanders, who has pledged to drop out if Biden enters the convention with more delegates.

But is it that simple? Biden is a candidate so weak and so flawed that he was rejected by Iowa, an important boilerplate. Biden has scandals and gaffes that will haunt him in a race against the nastiest president in history. He has yet to take direct criticism from Sanders in a debate. Tonight, in their first debate, Biden faces his reputation and the one-on-one onslaught of Bernie Sanders in their first debate, who no longer has anything to lose. Could Sanders shake Biden’s support among older voters by attacking his miserable record on Social Security? Could he shake Biden’s minority support by bringing up his history on race rights? Just as the Democratic Party put everything into a Hail Mary with Joe Biden, this debate is Bernie’s endzone throw.

Senator Bernie Sanders (VT): Bernie is down, but not out. His delegate deficit shows no signs of disappearing unless he completely reverses this election. But power never cedes anything without a demand. The nature of a reformer like Sanders is that you don’t just waltz into a party that’s broken itself and convince them to see the light. If it were that easy, the Democratic Party would have fixed itself already.

In order to seal his political revolution, Sanders needs to make the greatest comeback in electoral history; to prove the critics and pundits completely wrong. With half the delegates unpledged and primaries being delayed by COVID-19 fears, there is still time. Some have speculated that older Biden voters will stay home from the polls, leaving younger voters to dominate. I don’t know how realistic that is in a world where most voters vote from home.

No matter what, Sanders hopes to crush Biden in tonight’s debate and then dominate among Latina/o voters in Arizona. A win there and a strong showing in Florida could buoy Sanders.

Sanders, however, needs more than a buoy right now. He needs a movement.

Senator Liz Warren (MA): Warren disappointed on Super Tuesday. I compared her spat with Sanders to a knife fight, and it turned out like a knife fight. Everybody got cut, but Sanders and Biden combined to steal Massachusetts from Warren. Losing her home state, Warren dropped out of the race.

After facing calls to endorse Sanders or Biden, Warren came upon a golden opportunity to unite the progressive movement that she claims to represent. However, rather than endorse Sanders, Warren criticized the perceived sexism that she faced before dropping out. How that relates to Representative Tulsi Gabbard (HI)’s presence in the race, I don’t know. It seems as of now that Warren has refused to endorse anyone, instead taking the bitterness of her electoral base down with her. This is the end of Liz’s political career as a progressive, and perhaps the end of her political career in general.

Former NYC Mayor Mike Bloomberg (NY): Bloomberg’s $500 million campaign was a flop. After disappointing badly on Super Tuesday, Bloomberg dropped out of the race and endorsed Biden. Bloomberg will now pivot to spending on the general election campaign against President Donald Trump (FL).

Representative Tulsi Gabbard (HI): Tulsi Gabbard – the woman who isn’t allowed to run for president. Her campaign chugs on, but the media continues to ignore her. We talked about a Bernie blackout in previous weeks, but it pales in comparison to the radio silence that legacy media outlets are transmitting when it comes to Gabbard. I’d be curious to know when the last time Gabbard was even mentioned as a candidate on CNN. When Gabbard secured a delegate in American Samoa, meeting an existing debate criterion, the DNC increased that criterion from one delegate to 20% of the delegates. This ensures that Gabbard will not make the debate stage again.

As her campaign drags on and her rift with the Democrats deepens, it is becoming more and more likely that Gabbard will leave the Democratic Party to run as an independent. I’ve heard whispers that she courted former candidate Andrew Yang (NY)’s endorsement before he settled on Biden. The idea was considered of a Gabbard-Yang independent ticket under a Freedom Dividend platform. With Yang making up his mind, that ship has sailed, but Gabbard hasn’t stopped her slow drive to the general election.

Incumbent President Donald Trump (FL): Trump has now pivoted to the general election, watching the Democratic primary chaos from the sidelines. Interestingly, the Keys to the White House (from weeks 3, 5, and 6) have come back into play.

On the one hand, we have the possibility of a Joe Biden candidacy. This puts the “charismatic challenger or national hero” key, which says that if the challenger to the incumbent is charismatic, that seals a key for the opposition. Joe Biden is certainly not charismatic, with his worrisome verbal difficulties, and with half the country thinking he illegally set his son up for a job in Ukraine, it’s hard to say that he is a national hero just because he is a Democratic Party hero. While candidates like Warren, Sanders, and Buttigieg were widely seen as charismatic and heroic, Biden is an exception. By putting this key into play, Biden raises the possibility of a blowout loss to Trump.

The second key that has become relevant is the “recession” key. Previously, central bank policy had the economy looking recession-proof. But like all financial prosperity, the cozy illusion came crashing down when faced with real resource scarcity. The COVID-19 pandemic broke out shortly after Super Tuesday, straining supplies of medicine and medical devices. This sent stocks hurtling to some of their biggest losses since the 2008 financial crisis. The Fed dumped $1.5T of liquidity into the banking system, yielding a comically tiny bump in the market that was gone within half an hour.

We are out of monetary tools to handle this crisis. Now, only fiscal action can prevent recession. But the Republicans’ debt-mongering and cost-cutting puts them in an impossible situation. Only fiscal policy can boost the economy, but the Republicans have repeatedly promised voters that they would restrict fiscal policy, and in fact cut it completely. If they do not abandon that rhetoric, their hands will be tied to deal with the pandemic, and a recession could occur.

A recession, on the flip side to a Biden candidacy, could sink Trump’s re-election chances. It doesn’t matter who or what is to blame for a recession; the President takes the blame. It is therefore important to monitor the pandemic going forward, since Trump’s presidency may depend entirely on his response to it.