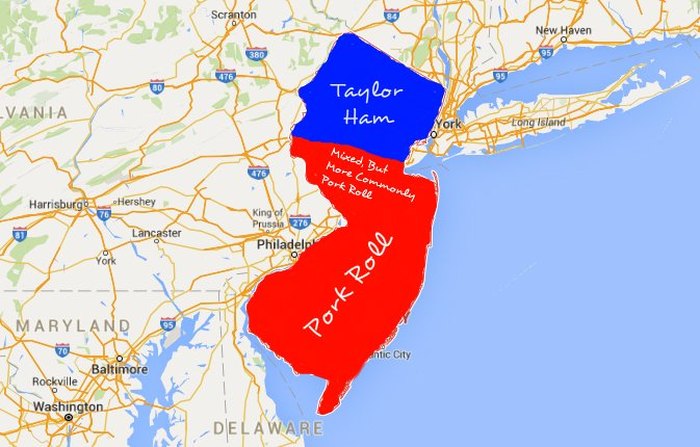 Photo (ABOVE): Kristen Koennemann / Only In Your State

I’ll set aside the obvious absurdity of Murphy claiming that Central Jersey exists at all – and the fact that “North Jersey, Jersey Shore, South Jersey” is a far more logical way to divide NJ into three cultural regions than contriving a “Central Jersey.” There’s more important business. Let’s address what exactly is going on with those counties.

And, wait a minute, did he say “state law”? He did. A quick search verifies that of course what he said is not true. There is no NJ statute defining Central Jersey.

In fact, this snippet from an education statute written in 1988 refers to the region only as “central New Jersey” – note that the word “central” is omitted from the proper noun. This seems to be the only straightforward reference to “Central Jersey” in the NJ statutes.

It’s the same thing with this press release from the Department of Environmental Protection in 2005. The DEP refers to the region only as “central New Jersey.” In the same press release, the President of Princeton University refers to the area as “central New Jersey,” though the Mayor of Plainsboro was quoted calling it “Central Jersey.” The DEP does not define either phrase.

Fast forward to 2010, when the NJ Department of Agriculture issued a press release titled “SECRETARY OF AGRICULTURE HIGHLIGHTS NEW GUIDE TO LOCALLY GROWN IN CENTRAL JERSEY.” Whoa! There we go! Maybe Murphy wasn’t making it up.

Except no, because only the headline says “Central Jersey.” In the text, the Department of Agriculture also exclusively refers to the region as “central New Jersey,” though it cites a guide written by a volunteer organization which says “Central Jersey.” So the department isn’t even issuing a definition; it merely publicized the fact that some volunteers used the phrase.

Burlington County! In Central Jersey! That’s rich! Absolutely not. Interesting that it isn’t even the same list cited by Murphy.

The same year, the New Jersey Attorney General’s office put out a press release to publicize a program that it referred to as “Fugitive Safe Surrender-Central Jersey.” The program allowed fugitives to safely surrender to police. However, outside of the program name, the words “Central Jersey” do not appear in the press release. The release also lists the counties involved as being Middlesex, Somerset, Mercer, and Monmouth Counties – a different list than those provided by both Murphy and the Department of Agriculture.

And while the NJ Attorney General may have gotten help from those counties, for a program that was named after Central Jersey, it never claimed that those counties actually compose Central Jersey. And that press release was the last government document I was able to track down referencing central New Jersey.

So, yes, NJ government entities have become more comfortable quoting material that refers to “Central Jersey” over time. However, NJ state law does not even directly state that Central Jersey exists, let alone where it is – something no one seems to be able to define. Again, I’ll set that topic aside. It’s for another day. For now, we can just establish that Murphy’s declaration is absolute nonsense.