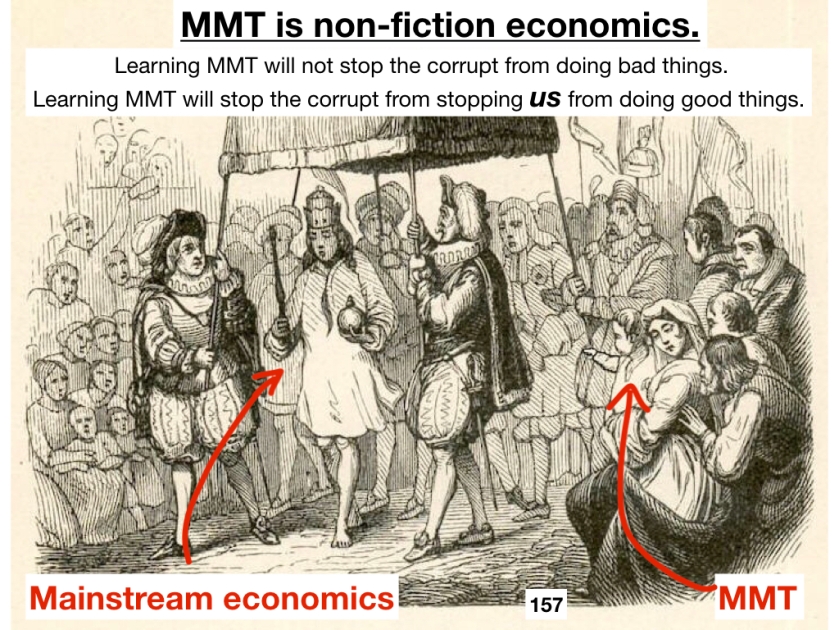 ABOVE: the final slide in my introduction to MMT presentation. Aside from the tweet, all photos come from my presentation.

Note from the author: This is a layperson introduction to MMT. For introductions by experts, there are many to choose from at the bottom of this article. The resources listed come from the massive pinned tweet (a thread of threads of threads) from my @ActivistMMT Twitter account.

Almost all of us are convinced that the federal government sees (and must manage) money, budgets, and finances in the same way that we do. It doesn’t. Not by a long shot. In fact, it’s downright Opposite World.

Why is this the case? Because we don’t create money – the federal government does. We use its money. This is the case for you and me, our families and businesses, and even the towns, cities, and states we live in – we are all currency users. The federal government (of countries with sovereign fiat currencies, such as the United States, the UK, Canada, Australia, and Japan) however, is the one and only creator of currency – it is the monopoly currency issuer.

We, currency users, cannot purchase resources (products, services, and labor) until we first come up with the money to pay for them. We must get it by earning, finding, borrowing, stealing, or begging for it. Sure, we could take out a payday loan to buy something we want to have but can’t afford, but that comes with a significant risk.

The currency issuer is in exactly the inverse position: it cannot create money until it first ensures that resources are available to purchase. If they are not, the issuer must find them (such as by import, trade, or invasion) or create them (such as by instructing citizens to manufacture or invent it). Sure, they could issue currency to purchase a resource that doesn’t exist (or is fully employed) but, like our payday loan, that comes with a significant risk.

You and I are limited by money. A monetarily sovereign federal government is also limited, but not by money. It is limited by resources. More specifically, it’s limited by its productive capacity which is its ability to create (import, invent, grow, recycle, etc.) resources.

This reality changes everything. It means that all federal spending is (and has always been) financed by created currency alone. Because this is true, it means that no federal benefits, programs, or agencies are funded by taxes. They can’t be. It isn’t possible for them to be.

(For those interested in the details of why this is true, read this 1998 paper by Stephanie Kelton (then Bell). To understand it more deeply, this tutorial demonstrates exactly how currency issuers create their own money, through a process called “reserve accounting.” Finally, this 2014 paper by Eric Tymoigne describes the specific mechanics between the Treasury and Federal Reserve.)

Very few average citizens understand how the economy truly works. We don’t understand what the national debt is, what causes it, or what effects it has. The same is true of the federal deficit and inflation. Most of all, when it comes to federal programs, almost none of us realize that the “how are you going to pay for it?” question – to even utter the words – is, at best, completely nonsensical. At worst, it is an insidious tool to trick us out of getting anything the wealthy few don’t want us to have. This is the reality revealed by a school of economic thought known as Modern Monetary Theory, or MMT. Simply stated, MMT is the truth about economics. Its fundamental insight is that our governments are capable of vastly more than we are told. The only things stopping them are the ignorance, fear, and greed of our federal representatives and their super wealthy donors. The only things stopping the citizenry are the ignorance and fear that have convinced us that daring to demand better guarantees that things become dramatically worse.

MMT demonstrates it is.

At first it’s quite hard to distinguish between accurate MMT information and hit pieces. Like Bernie Sanders, MMT is disruptive (because it’s the truth!). Therefore it is the target of many hit pieces. Below you will find lots of people, places, and resources you can trust for accurate information on Modern Monetary Theory. As long as you do a minimal amount of homework, most of these people are happy to answer your questions. Good luck! (FB=Facebook)

Here is a particularly good video to start learning MMT: Angry Birds and Deficits, by economist Stephanie Kelton. Also, this playlist by the YouTube channel Deficit Owls contains twenty-two excellent and short videos for getting started.

This link contains a listing of every known repository of formal research and papers on Modern Monetary Theory, as written by the economists and scholars who have developed MMT since the early 1990s.