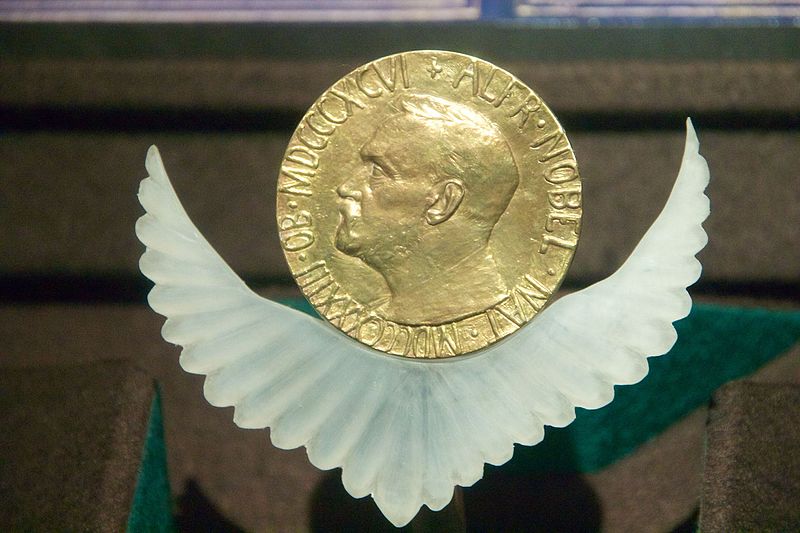 ABOVE: Photograph by Mike Peel (www.mikepeel.net), from Wikimedia (license)

When I first read about this, I thought I found a typo. But there is no typo.

There is no such thing as “the Nobel Prize in Economics.”

The Nobel Prizes are in chemistry, physics, “physiology or medicine,” literature, and peace. No economics.

Why does that matter?

The Sveriges Riksbank Prize is an easy way to give enormous credibility to an economist in a way that is totally unrelated to the content of their work.

1974 laureate Friedrich Hayek actually stated in his acceptance banquet speech that he would have “decidedly advised against” the creation of the prize to begin with, saying: “There is no reason why a man who has made a distinctive contribution to economic science should be omnicompetent on all problems of society – as the press tends to treat him ‘til in the end, he may himself be persuaded to believe [it].”

The award is controversial enough that Swedish officials have actually advocated for discontinuing it. That would hardly be a tragedy, since Alfred Nobel and his family never intended for there to be an economics prize. In fact, Nobel’s great-grandnephew Peter Nobel described the prize as “a PR coup by economists to improve their reputation.” Similarly, Hayek worried in his speech that the prize “would tend to accentuate the swings of scientific fashion” by giving clout to new ideas that haven’t been validated.

How does this work in practice?

What this looks like is that the recipients of the award have typically been mainstream economists with a free-market bent. This is unsurprising, since this monetarist, liberal perspective has been presented as the cutting edge of economics for several decades. The award has essentially just validated the direction that economics was already moving in.

In other words, the Sveriges Riksbank Prize being presented as if it were a Nobel Prize is a way for the Sveriges Riksbank to ensure that key establishment economists receive a high-profile award to seemingly validate their theories. Meanwhile, the public is given the impression that contemporary heterodox economic theories must have lost the contest, if orthodox economics won.

Without a surface-level association to the Nobel Prizes, the Sveriges Riksbank Prize would likely never have become an internationally prestigious award. It’s funded by a bank and awarded by a biased committee. It’s difficult to take seriously on its own. But naming the award cleverly has gotten it lumped in with the other Nobel Prizes as an equal, and now we’re stuck with it.

So what do we do about the prize?

Ignore it, probably. The Sveriges Riksbank Prize has about the same level of credibility as a J.D. Power and Associates award. The award tells us that the winner is famous within the industry, certainly. And they are likely doing some innovative work right now in order to receive the award. But it’s an industry award. Who seriously puts stock in a J.D. Power award? On the other hand, you also don’t rail against the auto industry for patting themselves on the back by creating these awards; you just go about your day and ignore them.

The winner of the Nobel Prize in Economics – no, sorry, the Sveriges Riksbank Prize in Economic Sciences – is a famous economist, and little more. The true battles of economics happen in journals and in real economies. The superior theory will win out on “sheer force of logic.” We don’t need to give it an award.