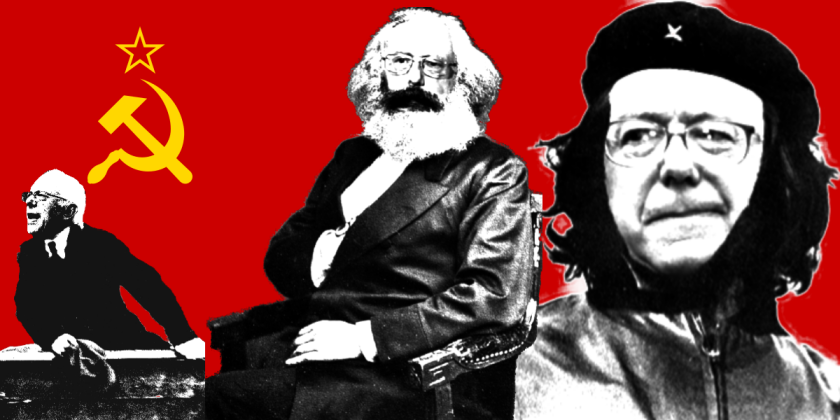 In the 2020 Democratic primary polls, Senator Bernie Sanders sits narrowly in second place, first in line to take the lead when former Vice President Joe Biden’s campaign inevitably collapses. With the possibility of frontrunner status come baseless attacks, chief among them: red-baiting, the Red Scare technique of calling your opponent a communist to avoid substantive criticism. Facing the false equivalency between socialism and communism, I hear some Bernie supporters correct their adversaries: “Bernie isn’t a socialist; he’s a democratic socialist.”

And if I hear it one more time, I might snap. A statement like “Bernie isn’t a socialist; he’s a democratic socialist” actually reveals a lack of knowledge.

These Bernie supporters often continue: “Democratic socialism is capitalism with a conscience,” they say, which is just as false as “Bernie isn’t a socialist.” Both these misconceptions (and more) start with a misunderstanding of the word “socialism.”

Painting with a broad brush, you can define socialism as an economic system where all resources and infrastructure are publicly owned. This is opposed to capitalism, where resources and infrastructure are privately owned. There are many ways to realize socialism through politics, and therefore there are many political systems involving socialism. Communism is just one such system, based partly on the Soviet model.

More savvy Bernie supporters, such as progressive commentator Kyle Kulinski, may be chomping at the bit by this point: “But Bernie isn’t a democratic socialist; he’s a social democrat,” they might say.

This is a much more reasonable statement, but it still isn’t true.

In the immediate future, social democratic policy and democratic socialist policy overlap. They both advocate expanding welfare to save lives, organizing workers to provide a better bargaining position, and reducing inequality by redistributing wealth in a democratic fashion.

BERNIE IS A DEMOCRATIC SOCIALIST

Based on this distinction, it’s easy to understand the differences between Bernie and a candidate like Senator Elizabeth Warren. At the July 30th debate, Jake Tapper tried to explore this topic, asking Warren if she stands by her past statements that she is a capitalist. She waffled, but the effect of her answer was “yes.” It was the only moment of tension between her and Bernie all night, as he stood by awkwardly at the podium to Warren’s right.

Bernie, on the other hand, has described himself as “anti-capitalistic” and once said in an interview, “I favor the public ownership of utilities, banks and major industries,” which is essentially a regurgitation of the definition of “socialism” that we discussed earlier. It can’t be clearer. All democratic socialists are socialists, and so is Bernie. Shying away from that truth to win votes is dishonest, and that’s why Bernie still calls himself a socialist to this day.

“What’s the harm,” you might ask, “in saying that Bernie isn’t a socialist?” Well, dishonesty aside, it’s bad messaging.

Bernie supporters shouldn’t shy away from conflict between capitalism and socialism. Capitalism has proven itself harmful, and the Red Scare is over. Calling things “communist” won’t work anymore. Bernie isn’t a communist; he’s a democratic socialist. We need not defend communism to defend Bernie. We can just advocate for the best policies. This is a sentiment that candidate Mayor Pete Buttigieg has repeated a few times.

Further, by running as a proud democratic socialist, Bernie is mainstreaming the term “socialism,” which is a major goal of democratic socialism. The mainstreaming of socialism is not just conducive to socialist organizing – it’s vital. For that reason, trying to shirk the label of “socialist” is counterproductive to Bernie’s campaign. It emboldens the redbaiters at a time when they have nearly weakened out of existence, and it obscures the contrast between Bernie and the other nineteen presidential candidates.

Every other voice in the 2020 primary would ultimately preserve capitalism if they were given the chance. What makes Bernie different is that he would not. Bernie has to take that contrast and run with it, to show voters that nobody but him can deliver fundamental change. In the end, the plans of every other candidate regress back to the same capitalism that is crushing us today.

Bernie, through socialism, is offering something different. It is foolish for his supporters to avoid a debate that they are likely to win. Bernie owns his socialism; his supporters must own it too.