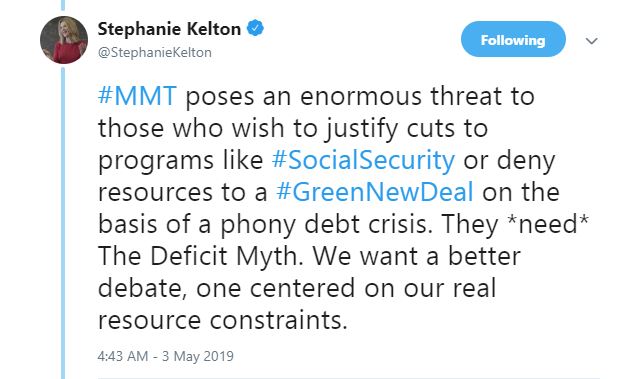 Bernie Sanders woke me up from a lifetime of political slumber. I discovered him in August of 2015, volunteered for his campaign for five months, ran with him on the ballot in my county, and represented him at the 2016 Democratic National Convention as a New Jersey state pledged delegate. After years of asking the question, “why don’t we have all the things Bernie keeps telling us we need to not die?”, I finally discovered the answer: Modern Monetary Theory (MMT).

People do not understand the reality of federal economics (in fact, they believe in Opposite World Economics), and because of this, they keep getting tricked into thinking that what they need to prevent their death, suffering, bankruptcy, and unemployment will cause Economic Armageddon.

I discovered MMT in February of 2018, thanks to my friend Geoff Ginter, and have studied it ever since. Before then, I had never heard of MMT or followed economics at all. In September 2018 at the Second International MMT Conference in New York City, I gave the first version of my “MMT-101” presentation (it’s since been completely rewritten). Geoff and I also participated on a conference panel. Now, Geoff and I travel around our state, introducing MMT to anyone who will listen.

Note that the opinions in this post are mine alone. Although MMT does not draw these conclusions, after studying it for a year and then looking again at our government and society, it makes them painfully obvious to me.

(Resources to learn more about MMT are at the bottom of this post.)

The wealthy few corrupt our government with big money, then tell us that “government is the problem!”, but shut us out so we have no chance to make it better. Then they tell us that the only possible solution is the free market – a solution that just so happens to further enrich those who corrupt the government.

What’s really sick, however, is the system that allows it to happen.

Make no mistake (as Bernie often tells us), the United States is the richest country in the history of the world. We can provide for all our people – where “provide” does not mean “provide luxury,” but rather “stop suffering.” Our country has an abundance of resources (real, tangible stuff) but our government withholds them from the people (prevents access to those resources), even though we need them to survive.

Yet we the people truly believe that austerity is necessary. We proceed to fight over the scraps, pointing fingers at each other, saying horrible things like, “I paid for my Social Security and healthcare; you didn’t, you illegal immigrant, lazy, non-rich, non-white person!”

Our governments choose to let people fight over scraps when we have more than enough to provide for all! Our governments shame and punish us for making bad decisions when they could easily prevent us from having to face those decisions in the first place.

We truly believe that it has to be this way! We believe our federal representatives when they tell us, “we, the federal government, don’t have enough money.” We genuinely believe that our suffering in reality is less important than their made-up “fiscal responsibility.” We are convinced that the only entity in the world allowed to create the United States dollar somehow doesn’t have enough United States dollars!

The United States and many other countries could perform miracles for their people if only they wanted. They could do so without raising taxes (on anyone!) for revenue, and without causing substantial inflation. Our federal representatives would rather be legally bribed into millionaire-dom by billionaires than stop the suffering of tens of millions. The reality is that our governments won’t give us what we need to survive because if they gave it to us for free, then the bribers (the owners of private, for-profit corporations) would not be able to profit off the “solutions” to our suffering.

Our lives are placed on the altar of their profit.

(And while it is disgusting and immoral that many billionaires pay no taxes, we don’t “need their money” to “pay for” anything. We just need them to have less of it! It is also disgusting that our government chooses war and tax breaks for millionaires, but do not for one second think that this somehow makes it more difficult for them to give us healthcare and the other things we need to not die.)

They are possible today, and they have always been possible. But they will never happen until we stand up and demand better. But we will never demand it until we believe it is possible.

Modern Monetary Theory demonstrates that it is possible.

To learn more about Modern Monetary Theory (MMT), see below for resources. Finally, the group where I learn MMT the most is Modern Monetary Theory for Real Progressives on Facebook.

When you’re ready, please ask questions. I and many others are here to help.