The idea that “taxpayer money” pays for our federal programs is economically inaccurate. The truth is that, ever since 1796, when the first dollar was created, every single dollar of spending by the US federal government is created currency. This includes the military; Social Security, Medicare, and Medicaid benefits; FBI, Congressmen, and judge salaries; interest on US Treasury securities; and so on. (That all spending by the federal government is created currency, logically extends to, “Federal taxes do not and cannot pay for any federal spending.”)

But more than being economically inaccurate, the idea of “taxpayer money” is a profoundly sinister and insidious one for our society. It further enables and promotes the neoliberal “monetarist” austerity economics that guarantees that the people will never actually get the big programs that we need to not die, suffer, or go bankrupt. “Taxpayer money” is also a racist, sexist, and classist dogwhistle.

(And if you think about it: If all of these things – Social Security, Medicare, and Medicaid – are created currency… then how can they “go broke”?)

Below is confirmation by many different economists, experts, and people in power, confirming that the above is true. Each contains a link to the original source so you can independently confirm.

(Here is a link to these same resources in Twitter form.)

‪Even when you try really really hard, taxpayer money does not and cannot fund federal programs. (Link to tweet)

Ben Bernanke was the Chairman of the Federal Reserve during the Great Financial Crisis of 2008. Here is the partial transcript from an interview on CBS’ 60 Minutes in 2009, starting at the eight minute mark in this video: 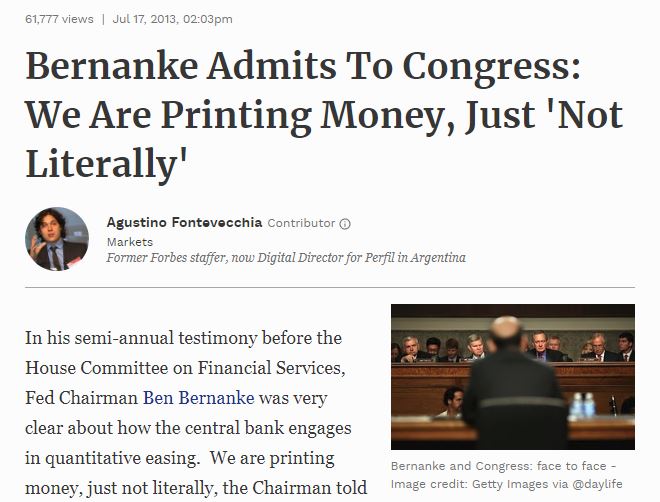 In 2013, Ben Bernanke testified to Congress – meaning, under oath. According to Forbes magazine:

(“Not literally” refers to the fact that the money is created in a computer, not by printing physical bills.)

Alan Greenspan was the Chariman of the Federal Reserve from 1987-2006. In 2005 he testified in Congress – again, under oath – to then Republican Speaker Paul Ryan:

There is nothing to prevent the government from creating as much money as it wants.

In other words, the only actual limitation to creating money is the real resources (that is: raw materials, labor, technology, and time) that are domestically available to the government. These are the resources that can be purchased after, for example, Social Security benefits – money – are added to the bank accounts of American citizens.

Alan Greenspan on NBC’s Meet The Press in 2012:

The United States can pay any debt it has because we can always print money to do that…. There is zero probability of default. Beardsley Ruml was the Chairman of the New York Federal Reserve from 1941-1946. In the January 1946 issue of American Affairs quarterly journal, he wrote an article called “TAXES FOR REVENUE ARE OBSOLETE.”

ABOVE: American Economist Stephanie Kelton, in the abstract of her 1998 paper, “Can Taxes and Bonds Finance Government Spending?”.

Australian economist William Mitchell wrote in 2010 on his blog:

Taxpayers do not fund anything. So when you hear commentators and politicians and the like use terms like “taxpayers’ funds are being mis-spent” etc, you can immediately conclude they do not understand how the monetary system functions.

Wray wrote in a 2014 article on Naked Capitalism:

Taxes are not needed to “pay for” government spending. Warren Mosler is the “father” of Modern Monetary Theory (MMT). It is his ideas that were adopted, polished, and formalized by economists (including the above), starting in the 1990s. The above is on page nine in his book, The Seven Deadly Innocent Frauds of Economic Policy (2010).

The following quote is on page 15.

It makes no sense at all to think that the government has to get money by taxing in order to spend.

Macroeconomics expert Ellis Winningham, in his 2018 blog post, “On the Use of the Ubiquitous Term “Printing Money” by MMT Novices – Please Stop Using It.”