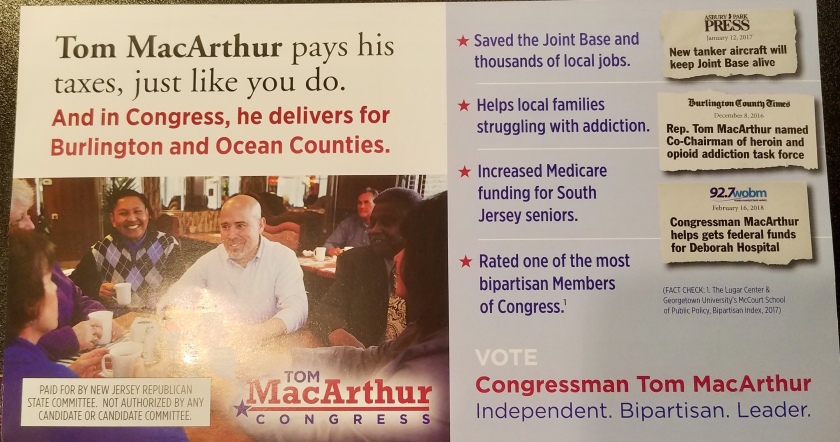 ABOVE: Mailer provided by the author

A letter to the editor by Laura Beverage of Medford, NJ

Another piece of revolting Tom MacArthur propaganda stuffed into my mailbox, this one proudly exclaiming that he is “rated one of the most bipartisan members of Congress.”

Before anyone who’s still on the fence (although I cannot for the life of me fathom how) becomes invested in this claim, you should know that the mailing’s referenced Fact Check, “The Lugar Center & Georgetown University’s McCourt School of Public Policy”, is a think tank founded by former Republican Indiana Senator Richard Lugar. The Washington Examiner, which published in its April 30, 2018 magazine the Lugar Center’s “most bipartisan members of Congress” report, which states that “9 of the 10 most bipartisan senators in 2017 were Republicans” is in and of itself a paper which became influential in conservative political circles, hiring much of its talent from The Washington Times and replacing the Times as the primary conservative paper in the capital city.

So, lest anyone think MacArthur is a bipartisan, “I’m here to represent all of my constituents” kind of rep, I strongly urge you to think again. If true bipartisanship is what you want in your next NJ District 3 MoM, your vote should be going to Andy Kim.