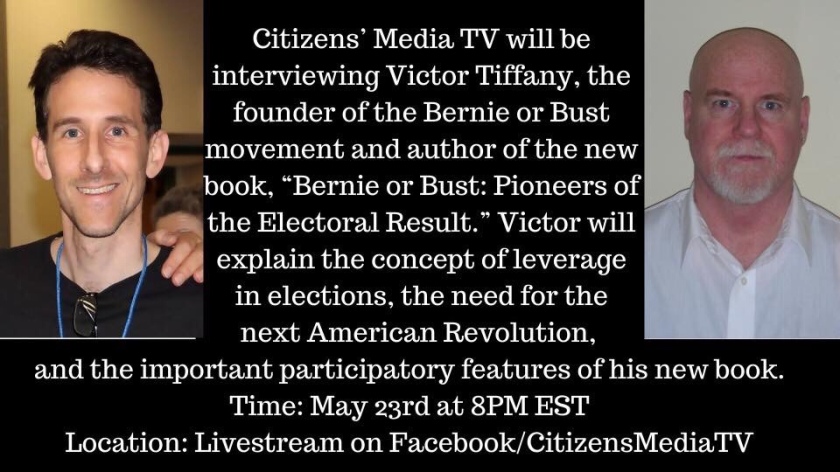 Interview conducted by Jeff Epstein, recorded on May 23rd, 2018.

A preview of my second interview with Victor Tiffany. Victor is a founder of the Bernie or Bust movement and its organization, Revolt Against Plutocracy. He is also the author of the new book, Bernie or Bust: Pioneers of Electoral Revolt. The mission of Revolt Against Plutocracy is to promote a strong but peaceful “electoral” revolution, where progressives are voted into office through making aggressive demands of candidates.

Near the end of our interview, I asked Victor to describe how he envisioned the revolution taking form. After he was done, my final question was to ask him if he felt that this peaceful revolution was actually going to happen.

His response was sobering and demonstrates the increasingly likely possibility that so many ignore; the desperation that is pushed off every election cycle. The excuse that is used at all levels of government, by both politicians and citizens, to crush progressive candidates and values and to prevent the scrutiny of center left/corporate/establishment/neoliberal candidates. This perpetual, never ending postponement is done in the name of “defeating that (Republican) monster.” It is true that there will be real suffering if “that monster” gets into office or serves another term. People may very well die. But at what point is the even moderately-tolerable existence of future generations considered more important than our own short term survival?

This preview is from an upcoming full-length conversation about Victor’s book and organization, and their goals. We also talk about Modern Monetary Theory, Bernie Sanders, and the overall progressive movement.