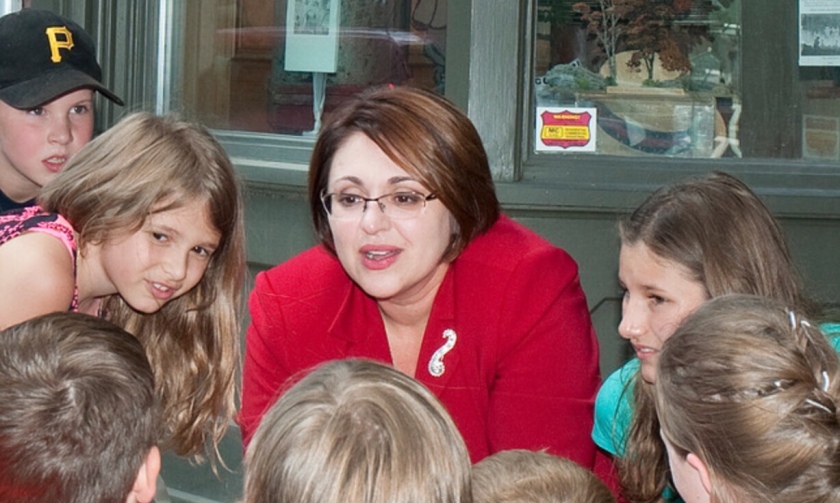 Editors note: At the time of this recording, Kerith was running for the United States Congress. Since that point, the Pennsylvania Supreme Court has re-districted the entire state, and Kerith is now running instead for the 66th District in the Pennsylvania House of Representatives.

Please consider contributing your money or time to Kerith’s 2018 State Representative Campaign. You can also connect with Kerith’s campaign on Facebook.

Below is the original podcast summary, based on Kerith’s Congressional campaign.

Kerith Strano-Taylor is running for the third time for Pennsylvania’s 5th Congressional district against Republican incumbent Glenn Thompson. Kerith is a progressive in a district that is more Republican than Democrat; almost exclusively white and lower income. PA-05 is geographically massive, extending from the far northwest corner of the state, all the way through State College, the municipality containing Penn State University. The district voted for Bernie Sanders in the Democratic primary, and for Donald Trump in the general election.

Kerith and I both served as national delegates for Bernie Sanders at the 2016 Democratic National Convention in South Philadelphia. It was one of the high honors of my life. It was not an enjoyable experience, however – it was a job. For an average of eight hours a day, I spent the week livestreaming for Citizens’ Media TV. The goal of my coverage was to demonstrate the difficulties and unpleasantness endured by supporters of Bernie Sanders, with a particular focus on the “unity” thrust upon us, ostensibly to avoid sabotaging Hillary Clinton’s chances against Donald Trump in the general. It is a highly charged topic.

In the early afternoon on Wednesday during the week of the convention, I was in an upper-floor lobby in a Philadelphia hotel with my two Bernie delegate-roommates and some new-found, now-lifelong friends. We were waiting to attend a conference by Democracy For America on the subject of running a progressive campaign. After interviewing three Bernie delegates for half an hour, I said on camera that I was going to stop filming and continue later in the day.

I’m glad I didn’t. One of my roommates, Rich MacFarlane, was talking excitedly with a woman in the far corner. I approached them and Rich introduced me to her: Kerith Strano-Taylor. At the time, she was well into her second run for Congress and was telling Rich (and now my viewers) how it came to be. I was immediately struck by Kerith’s energy and positivity. She is a force of nature. Especially after discovering that she was running for office, I spent much of the rest of the day interviewing her.

On our way to the Wells Fargo Center for the third (and second-to-last) night of the convention, I received a phone call from a friend involved in organizing activities in FDR Park. He told me that Bernie delegates were being invited to the main stage to speak to the hundreds of Bernie supporters spending the week in the park. Communication between Bernie supporters and the delegates they were there for was extremely difficult. Rumors were starting to spread, especially as it relates to how Bernie delegates were being treated in the convention building. Kerith, myself, and three other delegates went to the park instead of the convention, which turned out to be the most special moment of the week. (Here is more Kerith footage: FDR speech, post TV interview, on the grass talking with supporters.)

Now, a year-and-a-half later, Kerith is running her third campaign. This time, she has a full staff she says serves as a football team – with her playing the role of the football. The topics of our conversation included:

The most impassioned part of our interview, however, was a discussion of the evils of “traditional” fundraising, compared to the idealism of what fundraising should be. The Democratic Party requires all Congressmen to spend much of their day on the phone, soliciting donations. This quickly takes the candidate away from most of their constituents, necessitating a cycle of pandering to wealthier and wealthier contributors. It also imposes on the remaining parts of the day, which then must be dedicated to fulfilling the promises made during those phone calls.

Kerith calls this kind of fundraising – in a response she initially wanted edited out of the interview – “the closest thing to prostitution that I can ever imagine doing with my clothes on.” She followed this sentiment up with her most emotional statement of the interview, adding, “The process itself is absolutely…fucking awful.” She also told a story of a gentleman who, after learning the concepts of “traditional” fundraising, asked her, “Why would anybody who respected you, ask you to [do fundraising like that]?” It was an epiphany for Kerith, who now simply refuses to do any of this traditional ”cold-calling” fundraising at all. Instead, she spends all of her time connecting with potential constituents – even those that can’t afford to make a donation.