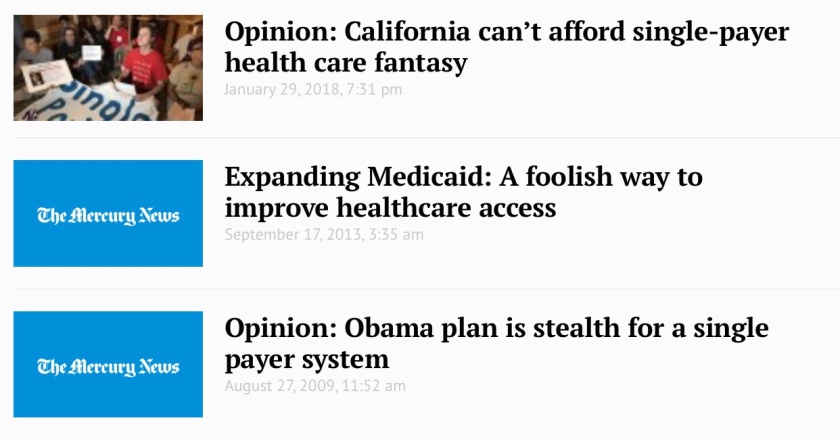 To say that Sally Pipes is a bad faith actor is the understatement of understatements. This article is just a bunch of notes and research, but it’s all you need to demonstrate that she is a monster that is funded by bigger monsters.

Don’t worry about anything she says. It’s all bullshit and meant to make you waste your time, taking you even farther away from actually getting Medicare for All.

Just tear her down as a bad faith actor funded by even worse faith actors. Research each of the sources that she mentions (think tanks and so on). Research who funds them. That’s how you win. By undermining her, her sources, and funders.

There are exceedingly-well funded organizations whose sole, full-time mission is to destroy anything that takes away a single penny of profit from private industry. Let’s take a look at one of them.

This thinly disguised trash propaganda “written” by Sally C. Pipes is what triggered the research in this article. Yet this article masquerades as journalism, validated by the “major publication,” Real Clear Politics.

In July of 2016, nineteen U.S. Senators delivered a series of speeches denouncing climate change denial from 32 organizations with links to fossil-fuel interests, including the Pacific Research Institute….

PRI has received grants directly from the Koch family foundations, as well as significant amounts of funding from the Koch conduits DonorsTrust and Donors Capital Fund

Study on the gender gap

Working women have reported in numerous opinion surveys that they don’t feel as if they experience gender-based pay discrimination. If anything, the gender earnings ratio reveals that women today are freer than ever to shape their careers as they see fit….

This wage gap is largely the product of a skills gap — specifically, a math skills gap. And the data show that women, by and large, have lower math scores than men.

[their attack on single-payer healthcare] would hardly come as a shock given the Pacific Research Institute’s history of questionable studies such as those presented in their failed effort to get rid of California’s clean air regulations or the Institute’s early efforts to fabricate research in support of the tobacco companies (although the highly suspect relationship with Phillip Morris began prior to Ms. Pipe’s arrival at the Institute.)

In fact, according to Mother Jones, Pipes has spent “nearly $1 million — $400,000 alone in 2010” on the services of Keybridge. This is a substantial amount of money considering that the institute has an annual budget of only $4 million. To have spent such a huge chunk on “research assistance” is quite a lot, indeed.

Pipes employs Keybridge Communications to do the writing.

Years of articles and books bashing government involvement in healthcare

[Anthony Rendon, who single-handedly killed single-payer in California] is not the only Democrat who has concluded that single-payer is economic suicide.

Obama’s health care “reform” will crash into our economy…. Americans can, and must, force its repeal.

In this Broadside, Sally C. Pipes makes the case against single-payer by offering evidence of its devastating effects on patients in Canada, the United Kingdom, and even the United States. Long wait times, substandard care, lack of access to innovative treatments, huge public outlays, and spiraling costs are endemic to single-payer.

Those are hardly outcomes we should consider foisting upon the American health care system.

Book: Miracle cure: How to solve America’s healthcare crisis and why Canada isn’t the answer

What ‘United States of Care’ Truly Cares About

California’s Nurses Are Militant — And Mistaken

California’s radical nurses’ union is pushing hard for a single-payer health care system in the state. It won’t work, and will lead to bankruptcy for the state.

President Trump and Congress want to start tackling the problem of runaway federal spending. The best way to do that is to start reforming Medicare this year.

It’s a New Year — but not a happy one for ObamaCare’s defenders. Two recent developments could lead to collapse of the health law’s exchanges. What to do?

Single-Payer Would Sicken, Not Cure, Massachusetts

Late last month, Senator Bernie Sanders traveled to Canada to see firsthand what the United States can “learn” from our northern neighbor’s single-payer healthcare system. The pied piper of single-payer.