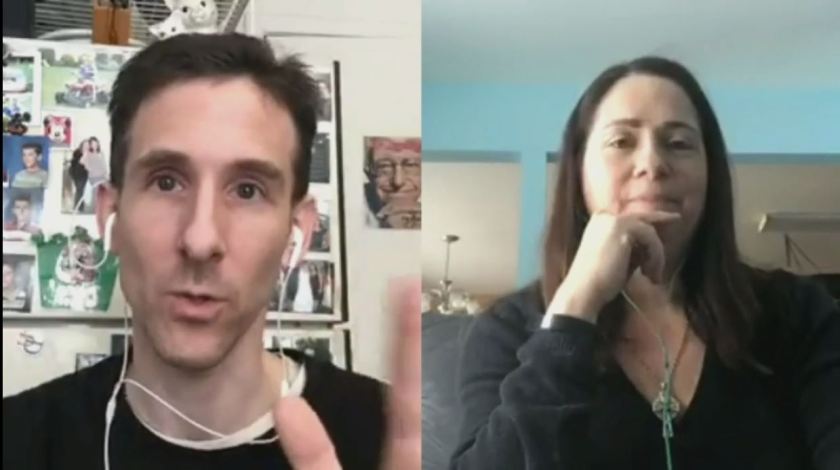 Originally from Great Britain, Anna Evans became an American citizen in 2009. She just ran her second (and last) losing campaign for Hainesport Township Committee, a committee that has been 100% Republican for decades. Anna is an Adjunct English Professor, published poet, and a strong supporter of Hillary Clinton’s 2016 presidential campaign.

Jeff ran on the ballot with Bernie Sanders, was only one of only around 40 candidates in the country to be personally endorsed by the senator, and was a delegate for him at the 2016 Democratic National Convention. Jeff was also a finalist for Brand New Congress.

Months ago, Anna and Jeff had a discussion about the 2016 election and the Bernie versus Hillary divide. Both left upset and emotional. This is their second try.

On one side is an avowed, although not naive, idealist who demands that the Democratic Party and its candidates be the best they can be – not just “better than the Republicans.” They must forsake big donors and fight for truly progressive policies such as Medicare for All. Jeff says we should “fight for the whole loaf” and “what we deserve,” knowing that we might not get it.

On the other side is a realist and pragmatist who is concerned, in our corrupt campaign finance system, that this pushing for idealism greatly increases the chances that Democrats will lose. Anna says that, given “terrible” Republican policies such as wanting to eliminate the minimum wage entirely, that the differences between Bernie Sanders and Hillary Clinton (and their “wings” of the party) is not all that dramatic.

Resources referenced in the interview: