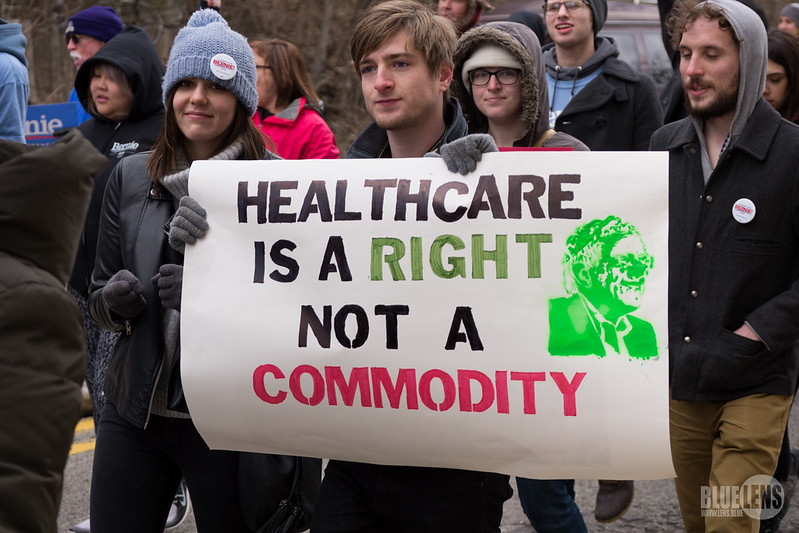 75% of Democrats, 60% of Independents, and 46% of Republicans favor single payer healthcare. Here is an article elaborating on this poll.

Republican support for Medicare for All has significantly increased in the past two years. Single payer healthcare would save hundreds of billions of dollars due to improved administrative efficiencies (because of not having to worry about insurance company profit!): From page 2 of 2010 U.S. Department of Health and Humans Services study.

Benefits of Medicare for All

According to Bernie Sanders, the cost of Medicare for All for the average American household would be a $500/year tax. Out-of-pocket medical
costs currently average are $5000/year…plus the hassle of red tape. (Note this is framed as “raising your
taxes,” despite being an overall $4,500 savings.)

The Urban Institute and the Tax Policy Center have released an analysis of the costs of Bernie Sanders’ domestic policy proposals, including single-payer national health insurance. They claim that proposals would raise the federal deficit by $18 trillion over the next decade. To put it bluntly, the estimates are ridiculous. They posit outlandish increases in the utilization of medical care, and ignore vast savings under single-payer reform, and ignore the extensive and well documented experience with single-payer systems in other nations — which all spend far less per person on health care than we do.

Medicare for all, not for profit

ObamaCare/ACA is a strongly conservative policy. Many of its main ideas originated from the Heritage Foundation:

The Heritage Foundation calls itself:

[T]he nation’s largest, most broadly-supported conservative research and educational institution—a think tank—The Heritage Foundation has been the bastion of the American conservative movement since our founding in 1973.

Insurance is meant for things unlikely to happen. Non-emergency healthcare is a common, regular occurrence for everyone. Insurance for a common regular thing is nonsensical. Profit off of people’s pain and suffering is immoral. The medical insurance industry is built on profiting off of sickness and injury.