“No business which depends for existence on paying less than living wages to its workers has any right to continue in this country.”

Minimum wage increased in a vacuum and instantaneously would be detrimental. It is intended to be increased over time and along with complementary legislation (implemented as quickly as is feasible). An important example is single payer healthcare which would dramatically decrease costs to both consumers (saving them an average of $4500 a year) and businesses (saving an average of $9600 per year per employee). (Single payer would also increase the negotiating power of employees and applicants, since the threat of losing healthcare when leaving a job would be eliminated.)

Most importantly, a living wage makes basic necessities affordable to the individual. This implies that they no longer have to rely on government subsidies such as public housing, welfare, food stamps, Medicaid, and free school lunches. They no longer need charity to survive.

These governmental programs are intended for emergencies and edge cases, not everyday survival—hence, “safety nets.” Instead of a company increasing wages to pay for these critical life needs, all of society pays for them through taxes. This is called corporate welfare.

There is a plethora of research to contradict this. Basically, the purchasing power power of employees is increased, accompanied by the fact that those at the lowest end of the economic scale tend to spend, not save. An increased wage also increases job satisfaction and decreases turnover, and makes those jobs more appealing to applicants.

According to a major study from May 2016 by the National Employment Law Project:

[T]he historical data relating to the 22 increases in the federal minimum wage between 1938 and 2009 [were analyzed] to determine whether or not these claims—that if you raise wages, you will lose jobs—can be substantiated….

The results were clear: these basic economic indicators show no correlation between federal minimum-wage increases and lower employment levels, even in the industries that are most impacted by higher minimum wages. To the contrary, in the substantial majority of instances (68 percent) overall employment increased after a federal minimum-wage increase. In the most substantially affected industries, the rates were even higher: in the leisure and hospitality sector employment rose 82 percent of the time following a federal wage increase, and in the retail sector it was 73 percent of the time. Moreover, [any observed] declines in employment are better explained by the overall national business cycle than by the minimum wage.

These employment trends after federal minimum-wage increases are not surprising, as they are in line with the findings of the substantial majority of modern minimum-wage research. As Goldman Sachs analysts recently noted, citing a state-of-the-art 2010 study by University of California economists that examined job-growth patterns across every border in the U.S. where one county had a higher wage than a neighboring county, “the economic literature has typically found no effect on employment” from recent U.S. minimum-wage increases. This report’s findings mirror decades of more sophisticated academic research, providing simple confirmation that opponents’ perennial predictions of job losses when minimum-wage increases are proposed are rooted in ideology, not evidence.

Myth: the minimum-wage only benefits teenagers

As of 2014, only around a quarter of minimum-wage recipients are between the ages of 16 and 19.

Myth: Increasing the minimum-wage will replace workers with automation

[T]he analysis suggests that more than 7.5 million jobs are at high risk of computerization. A large proportion of the human capital represented by the retail workforce is therefore at risk of becoming “stranded workers.”

Andrew Puzder, Trump’s initial choice for heading the Department of Labor, says that, “If a robot takes your job, the minimum wage becomes zero.”

These are unfounded scare tactics and dire future predictions (theoretical economics) that are predicated on a utopian view of technology. These kinds of threats often accompany trickle down economics and are geared towards protecting—and originate from—the powerful, by specifically demanding even more hardship to be shared among the vast majority of Americans. (Another example is millionaires threatening to leave their state if their taxes are raised. Most of them won’t.)

A 2015 poll by GfK Public Affairs & Corporate Communications, as sanctioned by the Associated Press, found that support for an increase in the minimum wage increased from 55% January 2014 to 60% January 2015. 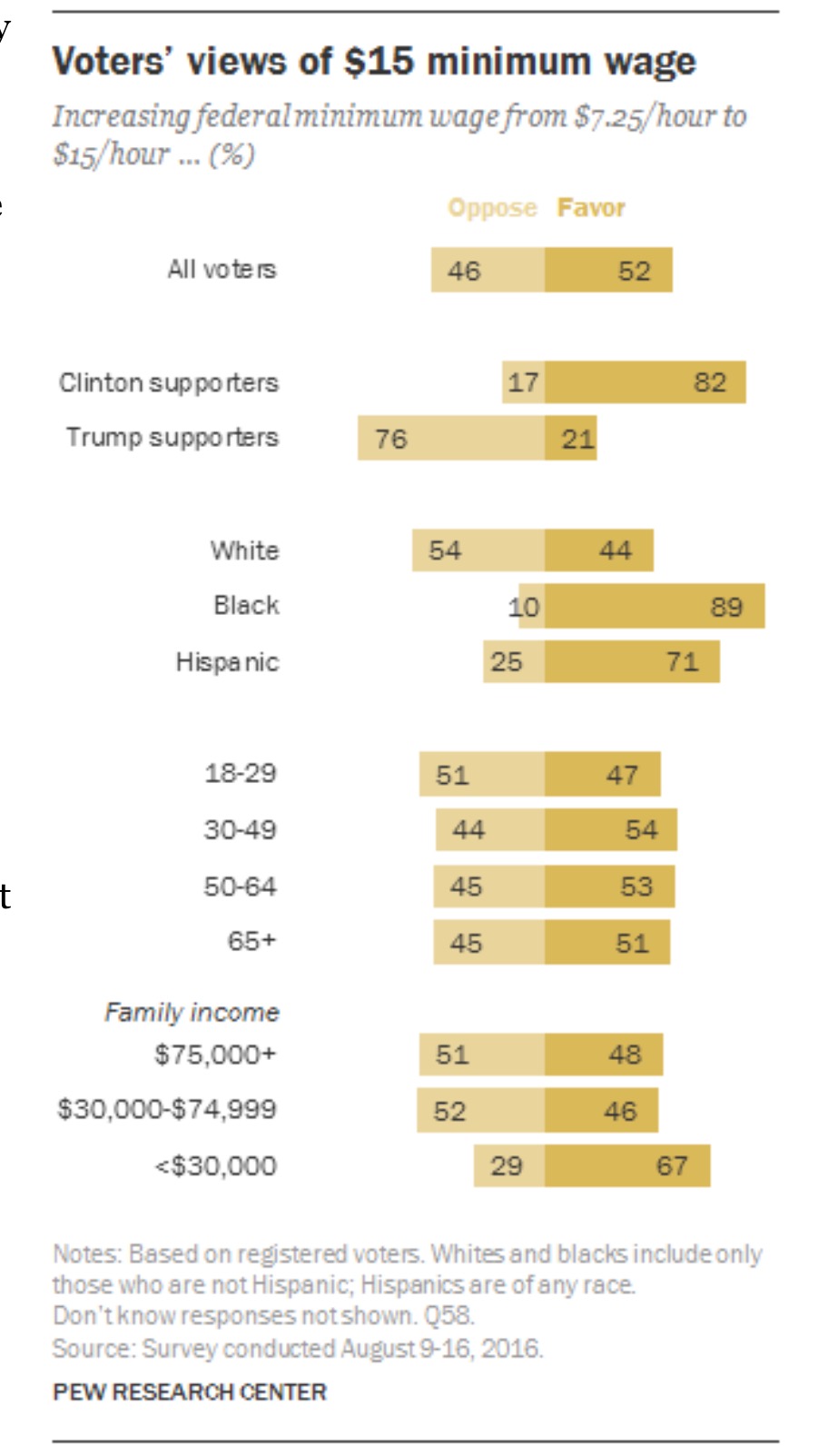 The minimum wage for tipped workers has been $2.13 since 1991—26 years. The theory is that tips should make up the difference between that and the federal non-tipped minimum wage of $7.25. But, according to a 2012 study sanctioned by twelve women’s advocacy groups (page 5):

Servers, who are 71 percent female, comprise the largest group of all tipped workers…experience almost three times the poverty rate of the workforce as a whole. Consequently, servers rely on food stamps at nearly double the rate of the general population.

In other words, the people who serve you food can’t afford food.

Since 71% of all servers are women, this further exacerbates the gender wage gap. In addition, 90% of female servers have no sick days or medical insurance through their employers, and a full third have no health insurance at all. 70% have reported going to work sick—serving food sick—for fear of losing income or their job (page 7).

The minimum wage in New Jersey

(New York has already passed a law to increase the minimum wage to $15 an hour starting in 2018.)

In 2013, The minimum wage in New Jersey was $7.25. That November, a ballot initiative to increase the minimum wage passed with 61% of the vote (as of January 2017, 25 states have a minimum wage greater than the federal minimum). Unfortunately, the amendment hooked continuing increases to a particular inflation rate that has since stagnated, resulting in a current minimum wage of only $8.38.

(Tipped minimum wage in New Jersey remains at the federally mandated minimum of $2.13.)

In August of 2016, the New Jersey Legislature passed a bill to increase the minimum wage to $15 over five years. It was vetoed by Governor Christie, who called it “really radical.”

The information in this section is from the BEST Index, as of May 2017. The Index is endorsed by the Institute for Women’s Policy Research, the National Council on Aging, and UMass Boston

In order to meet basic life needs, a Burlington County resident who is married with two school-age children must make $18.05 an hour. For an Ocean County resident: $19.24.