Above photo: Cousin Aaron and Braylon at the fundraiser

UPDATE 10/11/2017: CVS did respond to our request for comment. It went to our spam folder and we did not see it until after publication. The paragraph regarding the company and work benefits is inaccurate, and has been deleted. According to Mike DeAngelis, CVS’s Senior Director of Corporate Communications, family leave benefits are from the state, not the company. Phil Daniels has been on approved Leave of Absence since August 29, and continues to have employer-covered health benefits. After receiving our initial email, the company reached out to the family to assist with applying for related benefits, both internal to the company and otherwise. We apologize to CVS for the miscommunication.

WESTAMPTON, NJ — The October 6th, 2017 fundraiser at the Westampton Historical Society was the second of three being held by the Spotted Frog Art Studio for Braylon Daniels. Braylon is a seven-year-old boy who two months ago was running around a basketball court, jumping on a trampoline, and taking karate. He is now confined to a wheelchair and is fighting – and beating – brain cancer (Diffuse Intrinsic Pontine Glioma (DIPG)).

What struck me on this night was how unrelated some of the guests were, all brought together by a little boy many of them never knew.

Tracy Joy, the owner of Spotted Frog, met the Daniels family through a mutual friend’s recommendation. Joy was hired by the family to do two events: one for Braylon’s little sister, Brooklyn, and another for adults. She has since become friends with Braylon’s mother, Jenn. On September 23rd in Lumberton, Joy painted the faces of around thirty children for $5 a piece, donating everything to the family. Tonight, the family received $20 per participant. Joy’s next event for Braylon is on November 15th at the Pop Shop in Collingswood, a venue that fits seventy people, with $10 per person going to the family. “I want to help however I can,” Joy said. “It’s a sin, what’s going on, but seeing the improvements in him is crazy. It’s great.” Pemberton resident Shelly Dey had not heard of Braylon before seeing him featured in a Fox 29 news story. She said, “It just touched my heart. Me and my fiancé just looked at each other and started crying.“ Now she follows Braylon’s story closely on his Facebook and gofundme pages. Dey’s daughter-in-law, Ashley Call, is a nursing student who wants to work at the Children’s Hospital of Philadelphia (CHOP), caring for children like Braylon. The only thing Dey asked Call for her birthday this year was to share Braylon’s story on her Facebook page.

Westampton resident Theresa Tomlin lost her own husband to brain cancer two-and-a-half years ago. Her three-year-old does not remember her father, but her five-year-old does. Tomlin recalled what it was like to find out that a little boy was diagnosed with the same disease as her husband:

It [brought] back a lot of memories. I went through it with my husband, I can’t imagine going through it with a child. But he’s a fighter. It brings me joy to see how well he’s doing.

Tomlin’s mother added, “There’s no question, to do everything I feasibly, possibly can do to help this family get through this.”

And now? “I sit in bed with him if he’s tired sometimes. I help him if he needs help with word searches or puzzles, or stuff like that. I hope that when he gets better, we’re just gonna do the same things. He’s just always active, and so am I, and I like to be active with him.”

Financially, everything is a struggle. Jenn and her husband, Phil, can’t pay their bills (“nobody cares,” Jenn says, “they just want their money”), and because of our country’s healthcare system, they are significantly dependent on the charity of others. Painted by Braylon, without assistance or instruction.

Thanks to his mother’s persistence and insistence, it seems that the cancer was caught early, before it had a chance to spread down Braylon’s spinal column. Had the doctors listened to her, it might have been caught even earlier. But the blame could be easily shared among not just the doctors, but also whoever it was that decided that ten- to fifteen-minute appointments are enough in which to listen to a desperate mother, and perhaps even the medical education system that the doctors came from.

(In addition, Jenn herself had surgery this summer and was told to take six weeks to recover. Two weeks later, she was supporting and carrying her sick, above-average-sized boy in the early days of his diagnosis.)

This was the fourth time I’ve seen Braylon in the past month. The first time he had a feeding tube, his smile only included the right side of his face (the left side drooped, seemingly disconnected from his brain), every few minutes he had to use a machine to suction out mucus from the back of his throat, he was unable to eat any solid food, and the only people who could understand his words were his parents.

Now it’s one month later, and Braylon smiles with both sides of his face, he has not used suction in two weeks, he eats real food only by mouth (he ripped the feeding tube out of his nose because he was sick of it), and although slow and deliberate, I can now understand most of what he says. His mother told me that the doctors are finding his recovery to be remarkable. She thinks it might just be a miracle.

There is a long road ahead for this boy and his family. Two months before being diagnosed, Braylon was running around an adult-sized basketball court, sinking more shots than the average six-year-old. No one can say for sure, but it no longer seems to be a question of if Braylon is going to survive, but rather, how much and how fast he will recover. He will probably never know that he has touched so many. 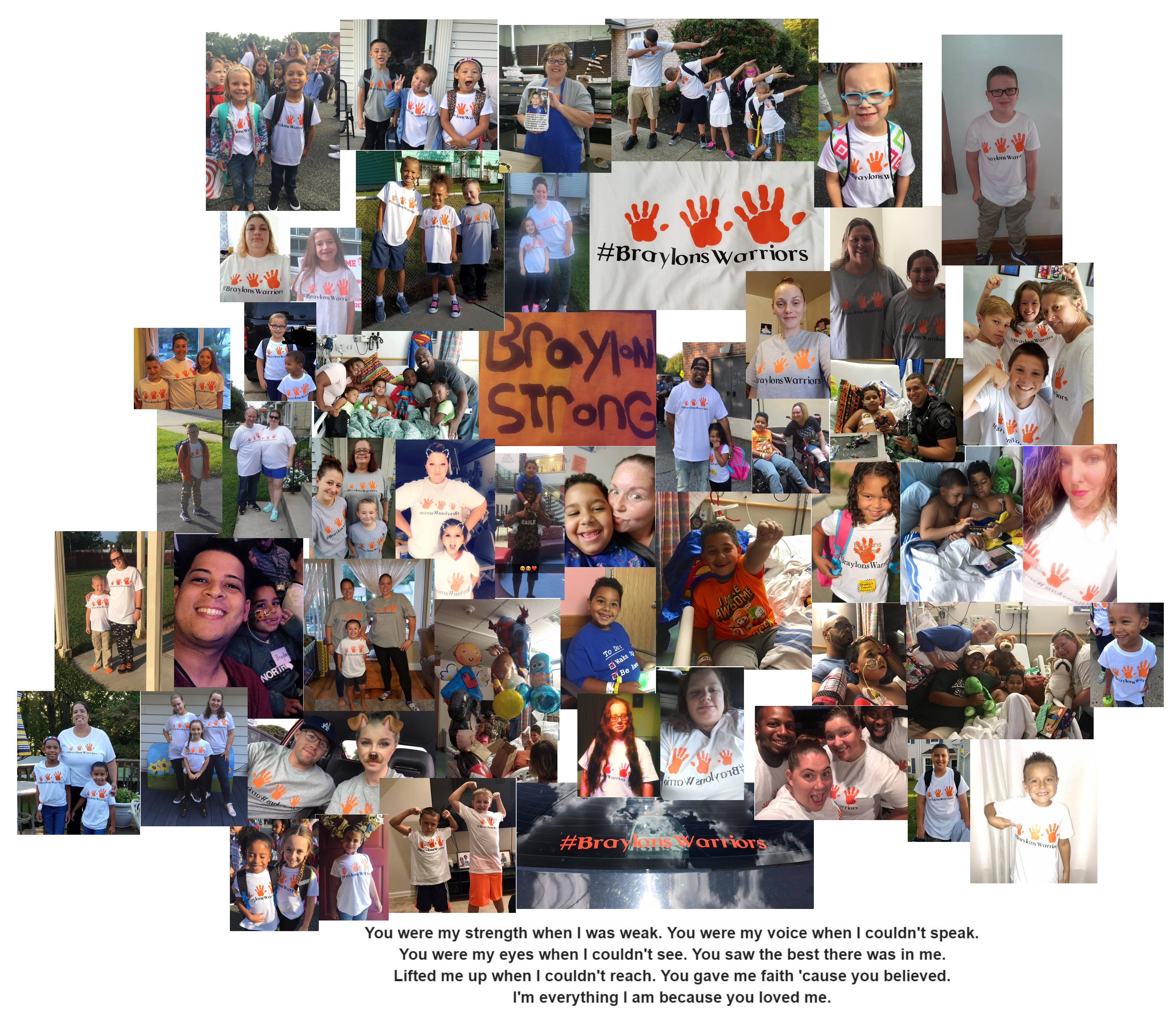