Jim Johnson is a Democratic candidate for New Jersey Governor, a former federal prosecutor, and a former “Under Secretary of the Treasury for Enforcement” in the Clinton administration. In a telephone press conference on Thursday, March 30th, Johnson announced that he filed a complaint with the New Jersey Election Law Enforcement Commission (ELEC) against front-runner Phil Murphy. Johnson asserts that Murphy used his non-profit companies as “dark money” organizations to “test the waters,” far in advance of announcing his run for governor. According to Johnson, this means that Murphy was legally a candidate at that time and was therefore required to comply with campaign finance laws.

According to the press release:

Phil Murphy set up and used these non-profits to prepare his run for governor and for his personal political benefit, which allowed Murphy to avoid registering, disclosing or being held accountable by ELEC or the public during the initial phase of his campaign…. It also allowed him to avoid the public and media scrutiny that would have come with declaring a campaign for governor in 2014…. [By] implementing this political scheme, Phil Murphy was able to avoid public disclosure to ELEC of over $5.1M in donations and expenditures in support of his campaign for governor.

According to Johnson’s complaint, the coordination between Murphy’s non-profits and his official campaign is extensive: 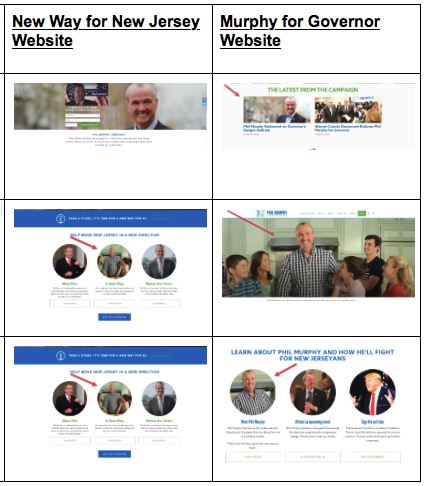 As reported by WNYC in October of 2016, Murphy did indeed strongly suggest in an email to John Podesta (as revealed in WikiLeaks’ “Podesta Emails”) that these non-profits would serve to “give us visibility, credentials, etc.” and, regarding his political ambitions, that he was “VERY serious but not yet committed.” This is despite Murphy stating during a 2015 TEDx talk that “New Start New Jersey is focused completely and utterly on strengthening New Jersey’s middle class and expanding it.”

On March 3, 2017, Murphy admitted on video to explicitly using these organizations for “kicking the tires… and really seriously looking at running for public office as governor.”

In 2012, ELEC ruled that then-Senator Barbara Buono violated these same statues with only $37,000 exchanging hands—in exactly one transaction. Buono used her Senate campaign account to pay for an eighty-question poll which included two questions asking people their opinions on the upcoming governor race and whether they would consider voting for Buono, if she happened to be a candidate.

This is vastly less than the $5 million Murphy is accused of spending, which includes more than $700,000 in unaccounted expenditures—across many transactions and occurring over more than a year.

Although the organizations have since closed, Johnson has filed this complaint now because he states that the ELEC commission “was just reconstituted in the last couple of days.”